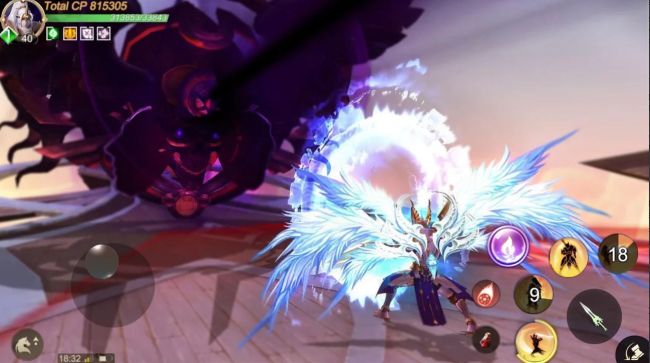 In our Eternal Sword M classes guide today we are going to help you better understand all of the classes in game and make it easier to pick the one that is best suited for you, as there are plenty of options.

So let me get you through every class in the game, explain their pros and cons, and help you pick the one that will fit your play style the best! But before we get into it, make sure that you check our Eternal Sword M game guide to learn all of the tips and tricks that you can follow and get stronger!

Difficulty to play: The Swordsman is not as difficult as the game portrays it, so I would say it is something like 3/5 rather than 4/5 as the game says it. I would recommend it for a beginner only if they already have some experience playing melee classes.

The Swordsman can be quite a fearful opponent, as they are masters at melee combat and depending on the specialization chosen, you can be either a quick opponent, one which will chain CC them, or one which will deal with the waves on enemies.

This class can specialize in 3 distinct ways, each providing a unique gameplay:

– Cold Blade: This specialization focuses the most on CC and it uses ice power to disable the enemies. They will also switch towards a more ranged Swordsman, to make it even more fun for those who want to give it a shot.

– Ghost Slayer: This specialization uses the power of fire to deal massive AoE damage, makes for a character which will excel at dealing with multiple enemies at a time.

– Rapid Thrust: This last specialization will make the Swordsman quicker than anything else in the battlefield, and uses the power of lightning to allow them to dash quickly through the battlefield. That will also give them some armor penetration, making them even more deadly.

If you like melee classes but want to deal a ton of damage and have fun watching your enemies struggle (because they will, trust me) then try the Rapid Thrust or Cold Blade, as they are in my opinion the strongest – depending on the circumstances.

Difficulty to play: 3/5 – It’s quite easy playing mage, as all of their skills are easy to understand and their defensive ability is somewhere on the medium. I do recommend this class for the ones who want to play a ranged magic damage dealers and are absolute beginners!

As a Mage you will deal with enemies from afar, keeping a safe distance and trying to keep them under crowd control effects all the time, while your spells work their magic and destroy them.

In my opinion the Mage is one of the most powerful (and possibly underrated) classes in the game. They have a little bit of everything going on for them, and they can deal massive single target AND AoE damage, depending on the circumstances.

The specializations for the Mages are:

– Scholar: This is pretty much the Ice Mage – it uses the power of ice to shut down and deal tons of damage to multiple enemies. It is pretty simple to explain, and it’s really fun to play as you can freeze/slow all enemies that get close to you.

– Cabalist: As the fire mage, the Cabalist will deal some of the strongest AoE damage, and leave enemies burning over time, which can be super annoying in PvP battles – and PvE alike!

– Wizard: As a Wizard you will have lots of debuffs for the enemies, but also the capacity to increase self damage. It’s not easily mastered, but once did you will deal some of the highest damage in game!

As a Mage main, I have to say that Mage – Wizard is super nice, but it’s definitely not for a complete beginner unless you dedicate enough time to master the right use of the skills. As for the other specializations, the Scholar is very fun because it will cripple enemies and that will help in many situations.

Difficulty to play: 4/5 – I think that this class is not really dedicated to those who tend to be a bit more on the lazy side. You will need to move a lot and dodge pretty much every hit, as the Gunner’s defense is pretty low, I don’t recommend it for a beginner.

– Hunter: The Hunter uses the power of ice to inflict crowd control effects over the enemies and allow the Gunner to get a little more “tanky” in the sense that they will be able to defend themselves if enemies get close by.

– Magic Gunner: This is a little more “unique” for a Gunner, because it doesn’t appear to have such a high burst damage as a Sniper, but the more a fight will go on, the stronger they will get. Oh, and they are great at dealing with multiple enemies!

– Sniper: As the name pretty much suggests, this is all about the damage! A Sniper will have even more single target damage which will be a great class to play if you want to rely quite a bit on PvP and bosses.

As a Gunner I really like the Sniper, as that is pretty much what the Gunner’s all about – at least in my opinion. The Magic Gunner can be good, but if you want to play an AoE class, then just go for Swordsman or Mage!

Difficulty to play: 3/5 – As an absolute beginner who doesn’t want to have to worry about the enemies’ attacks too much, but you still want to have a quite significant impact on the game, I do recommend trying out the Warrior!

This is what you could consider the “tank” class of the game. They can deal tons of damage, and they can take a lot too, which makes them pretty much a pain to deal with as opponents, and a great asset to any team.

Because of their very high attack as well, the Warriors can be more on the off-tank side as well since they can specialize in some damage too:

– Berserker: As the name might suggest, they do go berserk! They can have some of the highest damage which can be both single target and AoE and on top of that they can ave immunity to crowd control effects, so that can keep them going in fights for a long time.

– Defender: This is the “tank” specialization – They will ave everything that you might expect, from damage reduction, to HP regen and taunts to take on opponents and bosses alike.

– Gladiator: They have some super powerful crowd control and debuff skills, as well as some crazy burst damage which when combined with the default tankiness will make them an enemy to be feared!

Difficulty to play: 1/5 – This is one of the easiest to play, as she can be played (and enjoyed) by both veterans and new players alike. Her skills allow for quite simple choices and since they have quite high defense by default, you should definitely try it out.

Since the class is a little bit more unique, in the sense that it can be both a deadly damage dealer and a super cuddly (not really) support, the Miko uses her fan to wreak havoc!

– Spirit Maiden: This is going to be the dedicated healer, which has enough skills to heal an army and plenty of damage as well, which can mean that a Spirit Maiden will be a great asset to any team.

– Spell Master: The Spell Master will focus mainly on AoE damage, as well as inflicting various debuffs and play the role of a “support” second tier DPS in the game. That is going to allow allies to take advantage of all the exposed weaknesses of the enemy and destroy them quickly.

– Fan Dancer: A Fan Dancer will destroy enemies with sheer crowd control. That specialization is extremely fun to play as, and very annoying to play against as you probably well know that slowly you won’t be getting away!

As I’ve played around with Miko quite a bit, I find the Spirit Maiden to be the key specialization, as that is the only class that is a dedicated healer. Of course, in order to be a good one, you will have to dedicate quite a lot of time and pay attention to skill timers!

These would be all of the classes in Eternal Sword M! Which one is your favorite and why? Let us know down in the comments section below!