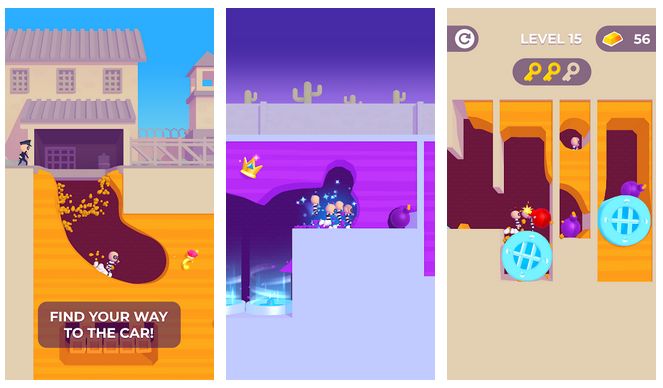 Escape Masters is a brand new mobile game created by Playgendary, on where you must guide your band of misfits to the vehicle and help them grab all the treasure along the way. Fun and challenging, this is that type of game that you simply can’t put down.

And today we’re here to help you with an Escape Masters Guide: a set of tips and tricks that will help you grab the three stars in all levels, so that you build your mansion as you see fit and get to experience all the levels in the game.

So without further ado, let’s check out below our Escape Masters tips and tricks!

You won’t always have 3 keys per level

I have played and replayed some of the early levels over and over again, desperate to get the three keys… but I realized that there simply aren’t 3 keys in all levels.

This makes things a bit frustrating, because whenever you reach the van and you don’t have three keys, you start worrying that maybe you missed one or more along the way… but chances are that most likely you haven’t and there simply aren’t three keys per level. Just deal with it!

The keys are actually scattered along various levels and whenever you have collected three of them, you get a chance to open treasure boxes for rewards. This is it! The game is not designed to have 3 keys in all levels.

Grab all the treasure along the way

Robbers love shiny things, so make sure that you collect all treasures along the way. We’re talking here about regular coins, crowns or other types of jewelry: if it’s there, it must be collected if you want to master a level.

While you don’t have a direct control over the characters in the game, you can influence their paths by swiping the finger on the screen and clearing some debris away. Make sure that you always strategize a bit here and clear the debris and therefore your characters’ path in such a way that they get to collect everything along the way.

It’s really annoying in some levels with those air launchers (not sure how to call them otherwise), as you don’t really have any control over them and your characters will miss collecting some of the treasure… but this is out of your control. Make sure that everything else gets collected!

Restart the levels to master them

Your main goal is collecting stars, not keys or treasure. You want to get 3 stars in each level you beat and you achieve that by getting all your people in the van. In some cases, not being able to collect all treasures will make you miss a star as well.

But you can’t always master a level in your first go. Instead, restart the level before completing it and play it again, now knowing what to do and how to create paths for your characters so that they collect everything and do everything right to grab those three stars.

This is the only thing you need in the game, and need it badly: stars to build up your mansion as you see fit. So don’t let any of these go to waste if you have the option to collect them!

Bombs won’t hurt you, but some obstacles will

Many of the obstacles in the game – including very high falls or even bombs – won’t do any damage to your characters, but there are some things that will.

For example, the red spikes that appear here and there will destroy any robber that hits them. So always pay attention to the environment and make sure that you take advantage of all items that help you, but stay away from those that don’t.

This is usually easy to achieve by simply creating paths in such a way that they are not allowed to get anywhere near.

Sometimes, you will have to use multiple paths to beat a level

In the more advanced levels, you will have to split your group of robbers in two in order to collect everything there is to be collected and bring everybody to the van.

You will usually have no problem realizing that there are two distinct paths that you should follow as the game area obviously splits into two direction (for example one route down towards water and one to the side, above the water).

In order to take two paths, you have to move fast – let some characters go one way, then quickly remove the base behind the remaining ones, so that they are forced to take another.

In the example above, after a few characters pass to the right, I quickly swiped under those above the water and saw them fall into it. The game will choose one of the two to focus on, but once they are in the van, it will revert to the second group which you will now be able to control and send to safety, making sure that you gather all goodies along the way.

How to turn Ads off?

Ads are really annoying, I know, but have in mind that it is those ads that pay the developers for their hard work creating this awesome game. And since there is no option to pay for an ads free experience, please consider keeping them on as a thank you for this game.

But if you really have to do without them – maybe just every now and then, when you want to fully focus on the game and have no distractions – you can turn them off following the indications below.

Simply force quit the game and put your device on airplane more (or just turn off WiFi and/or mobile data). Then simply restart the game and you will no longer get ads – but also you won’t be able to watch ads for extra money or keys.

What are gold ingots for?

This is still a mystery for me and I don’t think that there is anything you can actually do with all the money that you collect in the game.

Maybe it’s just an indicator of how well you’re playing the game, maybe the developers are planning to introduce something new to do with the money in the future… but right now there is nothing you can do with the money.

These would be the tips we have for Escape Masters and hopefully they are enough to see you beat all the levels… and master them with 3 star ratings. If you have additional advice for fellow players or any questions, don’t hesitate to let us all know by commenting below.