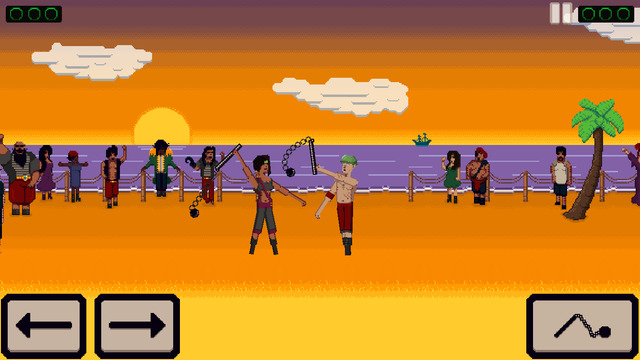 Mr. Tans has invited the best flail fighters from all over the world to his private island. Here, the ultimate flail tournament will decide who is the true flail master! Epic Flail is a goofy 1-on-1 dueling game. Control your character’s flail and land devastating head blows! The controls and physics are kind of tricky to get the hang of, but we’ll help you out with our Epic Flail cheats, tips and tricks strategy guide!

Precision and accuracy are what matters the most in this game, so don’t go tapping away like a crazy person! Doing so will cause your character to just wiggle their flail around wildly, not causing any real damage. Remember that in order for a hit to connect, your flail must be moving fast enough and it must hit your opponent’s head. Time your strikes well and don’t tap too fast!

After you get the hang of things, you’ll quickly find the “perfect distance” for a strike. If the gap between you and your opponent is about two centimeters, it is the perfect time to strike! At the start of a round, you’ll be just about this distance away from your opponent, so a quick step forward to give your flail some forward momentum should be enough to land a critical blow.

3. Bait your opponent into an attack!

While getting the distance down is good to master, don’t expect your opponent to just let you freely walk up to them! A good strategy to employ is to bait your opponent into an attack. Walking back and forth rapidly, or “dash dancing” is a good technique. Walk just short of your opponent’s swinging range, then quickly walk backwards out of it. If done fast enough your opponent will swing their flail, leaving them open to counter attack. Just be sure not to get hit by their flail as they’re raising it back up!

Remember that since this is a physics-based game, movement and momentum play a big part. Try not to do idle stance swings, which is just swinging your mace while standing completely still. To really put some “oomph” into your swings, tap the swing button while moving forward for a bit. As your flail hangs behind you, it’ll pick up speed along with your character. Swinging then will give it the force to fully reach your opponent! This also works when you’re recovering your flail back into neutral stance. Moving backwards will give it enough power to flow back into its neutral position.

If you’re looking to get a tighter feel on the physics on the flail, why not try 2 player mode? Even if you don’t have a buddy around to play with, you can still use it to practice yourself! It’s helpful to practice your moves and get the controls down with an opponent who is just standing there.

That’s all for Epic Flail. If you have any other tips or tricks to share, leave a comment below!