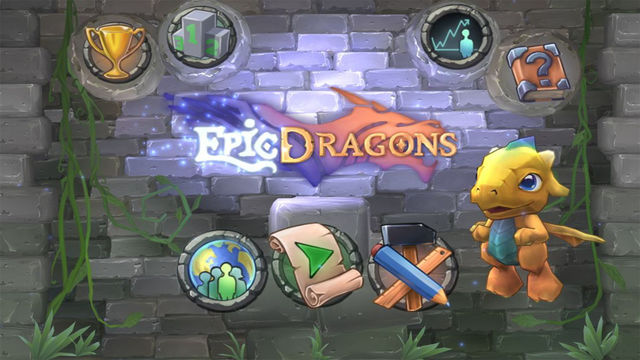 Epic Dragons is an exciting all-new take on the tower defense genre. Instead of towers we get – you guessed it – dragons! Place dragons of different elements around the board and help defend their homeland against thieves! We’ll help you get all the stars on each level with our Epic Dragons cheats, tips and tricks strategy guide!

1. Don’t put all your dragons at the beginning of the path!

So, it sounds a little counter intuitive, but putting your dragons near the beginning will hurt in the long run if you’re trying to get all three stars. If the enemies die before they can reach the stars, you won’t get them! Instead, I suggest taking the Path Blocker ability and setting rocks down near the beginning to funnel the enemies into a path with the stars, then place your dragons later on.

The Ice Dragon has longer range than most other dragons, but it doesn’t do too much damage. The real point to using it though is to slow down enemies. Enemies are heavily slowed when hit by the Ice Dragon, and it sets them up to take extra shots from nearby dragons. Always bring it!

3. Use the right dragon for the job!

Certain enemies are more vulnerable to specific dragons. For example, the minotaurs have a ton of health and can take a lot of punishment before they go down. However, they take extra damage from Fire Dragons. Be sure you’re equipped for the level!

4. Know the range of each dragon!

Knowing the range of a dragon before placing it down is key to proper positioning. Unfortunately there doesn’t seem to be a way to check range before placing down a dragon, so you’re just going to have to remember through experience. For starters, the fire dragon has the shortest range of all the starting dragons. The ice and lightning dragons have pretty long range.

Sometimes it’s better to upgrade your existing dragons rather than buy new ones. If you have dragons already placed in a pretty good choke point, you should just upgrade those instead of placing more around. Upgrading dragons increase the damage and range, so try to do it as much as possible.

If you have any other tips or tricks to share, let us know in the comments below!

Epic Dragons Cheats: Tips & Strategy Guide to Get All Stars