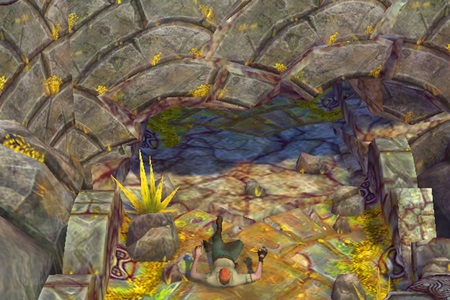 The highly successful endless runner game Temple Run 2 has received a new update, just in time for Easter. This new update is just as surprising as the fact that you will have to avoid several traps in the game: that’s to say, none.

Temple Run 2’s Easter Update includes another hat, just like previous Seasonal Updates. To obtain the hat you will have to collect five new artifacts during each run. Once all of them have been obtained, you will be able to wear a set of bunny ears that can be worn by all characters.

A new mini-game has also been included in the new Easter Update, aptly called Wheel Of Resurrection. The mini-game can be accessed every time you will use a Save Me!

Other features have also been included in the update, like cloud synching, which will allow you to record your stats and upgrades accross all devices. That’s a really handy features for all those who like to play the game on different devices.

Temple Run 2 is now available for download on the App Store. It’s a really excellent game, so consider downloading it if you’re a fan of platformers and endless runner games.