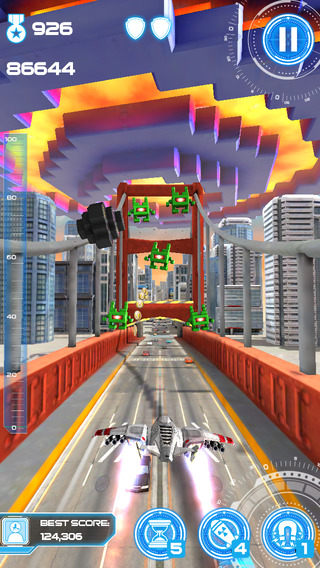 In Jet Run: City Defender players will be controlling a fighter jet as it proceedes automatically through the city, shooting at different alien type as they appear on screen. The controls of the game are quite simple: players will be able to swipe in four different directions to change lane and tap enemies to aim and shoot at them. Even though the jet moves automatically on a set path, it’s possible to take different directions at specific moment, adding a bit more variety.

As in several other endless runner games, Jet Run: City Defender features different customization options and power-ups, which can be obtained by using in-game currency. Being a free to play title, players who cannot spend too much time with the game can use real money to purchase power-ups, upgrades and more.

Jet Run: City Defender is a quite standard endless runner game featuring some light shooter sequences and a unique presentation. The game is nothing revolutionary, that’s for sure, but it’s solid enough to keep players engaged for some time.

Jet Run: City Defender is now available for download for free on the App Store.