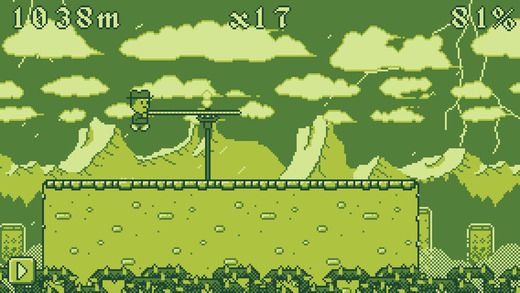 Jack B. Nimble, the nice endless runner game developed by Sean Noonan now available on the App Store, has received a new update which includes a new stage and more.

The new stage is called Bitter Bluffs and, as expected, is set in a wintery landscape so expect to see plenty of snow. The stage also comes with a new color palette that makes it feel more wintery. The new update also includes Game Center leaderboard support, a new feature that will make playing the game even more engaging.

With the new Winter update now out, another Jack B. Nimble update is already in the works. According to the developer, the next update will include at least one new level, one new character, new colour schemes and Game Center Achievements.

Jack B. Nimble is a really interesting endless runner game sporting a retro-inspired presentation reminiscent of classic GameBoy platform games and some really interesting mechanics that spice up the experience considerably. In order to increase the score multiplayer, players will have to whip candlesticks found during stages. Using the whip alters the character’s momentum so players will have to use it only when absolutely safe.