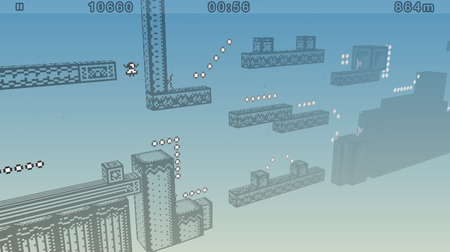 Nostalgic gamers playing on iOS devices have been able to enjoy a really nice game called 1-bit Ninja, a tribute to the GameBoy era featuring a gameplay experience and graphical style reminiscent of the successful handheld produced by Nintendo.

More old-school inspired action from the same team is going to become available in the next few hours on the App Store. 1-bit Ninja Remix Rush is a reboot of the game published by Kode80, still featuring an old school inspired presentation and gameplay experience and procedurally generated stages, effectively making the game an endless runner. So players not only will have to time their jumps corrently as to not fall into those endless pits but also do it as quickly as possible, as there’s going to be a time limit, which can be increased by collecting bits.

1-bit Ninja Remix Rush will be released on the App Store tomorrow, on January 8th. The game will be available for both iPhone and iPad.