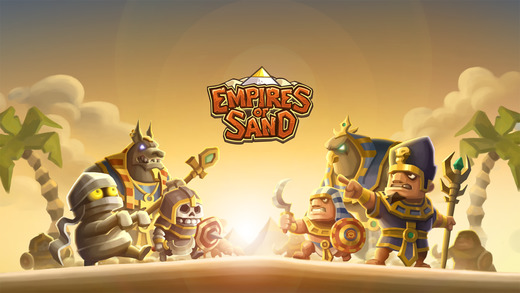 Egypt has fallen under control of the evil god Seth, and it’s up to you to seize the day! Empires of Sand – a unique combination of tower defense and city management – puts you in charge of an Egyptian stronghold where you will manage resources and fight off Seth’s horde of monsters. Build up your fortress and power up your troops as you become the best pharaoh in all of Egypt with our Empires of Sand cheats, tips and tricks strategy guide.

Are you ready to take back Egypt from the clutches of Seth? We’ll help you out with our Empires of Sand cheats, tips and tricks strategy guide.

Make sure to start out on Easy difficulty!

After the tutorial is over, you are free to tackle the third level at any difficulty you want. I thought I’d be ready for at least Normal, but it turns out that wasn’t the case. The enemies comes at you in large quantities, and I mistakenly blew all my stone leveling up my city center to level 2. Thus, all of my towers were still base level and they hardly made a dent in the enemy waves. So, to start out, you should play on Easy mode until you get some upgrades in!

Upgrade either your Archer or Magic tower first!

Following that example, don’t be like me and spend your starting stone on a city center upgrade because it takes a long time to get stone back from your one quarry. Instead, upgrade one your attack towers. This will help you immensely when you first start out, as noted above. Following that…

Stone is your most precious resource! You need it to upgrade your city center, your attack towers, and build new towers. Gold is not as necessary, as you can only spend it on unlocking new creatures in the barracks, unlocking spells in the temple and upgrading your quarries. Case in point, you should always upgrade quarries whenever you can because you will be using a lot of stone.

Strategize with your towers!

Enemies will have either two types of resistances: physical and magical. Arrow towers are good for enemies without physical resistance, and magic towers are good for – you guessed it – enemies without magical resistances. Place these towers in conjunction with your barracks towers, which summons guards to fight for you. Enemies will automatically engage the guards, making some extra time for you to rain down on them. It’s important to place the barracks towers within range of the attack towers, but also remember that you can change the position of the guards to further strengthen your defense.

Tapping the gold medal at the top left will bring down a list of achievements you can accomplish. Each one lists a reward, and some of these rewards are pretty hefty, so try to do them if you can! They’re great for extra gold and stone. Do note that you have to manually go back into the achievements and accept the reward once you complete them, they’re not added automatically to your resources.

On that same note, you get a daily mission to do every day. These missions are worth 500 gold and stone, which is very handy if you’re in dire need of some resources.

During PvP, time your creatures with the neutral creatures!

When you fight in the arena against another player, the map is split two-ways so that both players have to deal with neutral enemies. There’s a crypt in the middle of the map that sends an equal amount of neutral creatures towards both players. What you want to do is to send your creatures in line with the the neutral creatures, so that your opponent has to deal with an extra large force! It’s a heinously tactic that should be used as often as possible to give you the edge in arena matches!

That should get you on your way to becoming the best pharaoh in all of Egypt. If you have any other questions or suggestions, leave us a comment below!