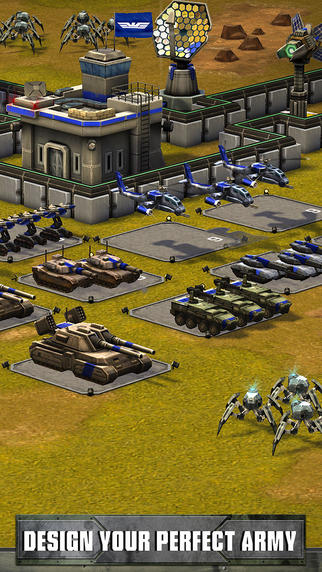 Empires & Allies is a new base management strategy game. Build up a worthy military base and take out the GRA, a deadly new terrorist faction. Join up with other players and make new allies, or take them down and become a massive empire. We’re here to share with you the best combat strategies we’ve learned so far with our Empires & Allies cheats, tips and tricks strategy guide!

1. Examine the enemy’s base before you strike!

Knowing is half the battle! Before you jump into an assault, you get to scout out the enemy’s base. Here you can see any defensive towers they have and what their range is. Use this time to plan out your attack be as efficient as possible.

Your command powers grant you special abilities to use during an attack. They require commander points to activate, which can be obtained from destroying enemy buildings. When you first start out, you will only have access to the flare and airstrike. These are two extremely useful abilities though, so don’t count them out! Flares will let you target a building and all of your troops will focus fire it. Airstrikes deal big damage in a little area.

3. Take out any opposition first!

Before you demolish a base, it’d be wise to take out any defensive measures they have. Scout the base and find where the towers are. When you first launch your attack, send out an airstrike on any of the towers. It should destroy it in one hit. If you’re lucky, you might even get some command points back, maybe enough to launch a second airstrike!

Sometimes, there will be barrel caches in the enemy bases. These caches explode when they’re taken out, and if there’s anything nearby, it’ll get destroyed in the process. If there are caches close enough to each other, you can deal extreme damage with one carefully placed airstrike. Look for these opportunities and take advantage of them; you might just even wipe out a whole base with one airstrike!

5. Send in your stronger units!

When attacking towers head on, it’s best to position your tougher units on the front lines. For example, when you start out, you will only have access to the Rangers and the Striker VI units. The strikers are armored vehicles that have much higher health than your rangers, but since you will most likely have more rangers, they will end up doing more damage over time. To maximize their damage, send in your strikers first so that they draw the attention of the towers, providing cover for your rangers. You can do this by deploying your strikers first at the beginning of the level, waiting a second or two, then deploy your rangers.

6. Use walls to protect important structures!

Walls are very useful for buying yourself some time. A good strategy to employ is to position your towers nearby important structures, such as your headquarters or supply storages. Then, wall off the tower. If enemies try to take you tower, they’re going to have to take down your walls first. If they choose to ignore the tower, they’ll be pelted by it while they try to destroy the other buildings.

That’s all for now! If you have any other tips or tricks to share, leave a comment below!