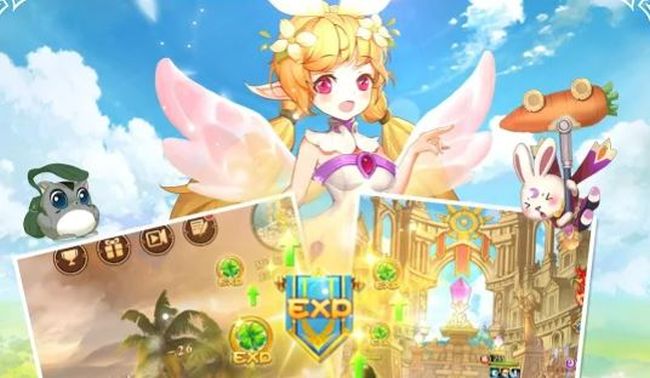 In today’s article I am going to tell you all the Elora’s Raid tips and cheats that I have collected so far and share them with you, so that you can pass more stages in the game and put together a powerful team of heroes.

The game will have some pretty simple mechanics and all that you really need to worry about is that you are constantly making all the upgrades necessary, because that will keep you constantly ahead and ready to face the new challenges. So all that you need to keep in mind in order to get stronger is be persistent – but let me explain further below!

So without further ado, let us dive right into the Elora’s Raid tips and tricks to get more powerful and pass more stages!

Start by fighting more bosses to level up fast

This should be a no brainer, but the fastest way to obtain more Gems is if you level up a lot and fight the bosses in the stages as often as you can. That is the best thing you can do early on because it is going to give you not only Gems, but also tons of gears, hero shards and much more.

I suggest that you try to challenge as many bosses as you can with your current team formation, and if you cannot advance any further, then you can camp one level or try to do more missions on the side to gather more heroes. However, I doubt that will be the case, because you will receive plenty of hero shards by just challenging bosses.

Another super important part when challenging the bosses is how you set up your team. So let me explain a little further:

Set up the team formation accordingly

There are several team formations that you can set your heroes in, and since you can have a maximum of 5 heroes on the battlefield at all times, the team formation will be different and can be used to counter the enemy’s units.

You can change the team formation in the pop up interface which appears right before challenging a boss, and if you look on the left side you will see a Switch Formation button. You will unlock a second team formation (Pincer) at account level 20, then at level 30, 40, 50 and 60.

Make sure that if you are having a difficult time defeating a wave of enemies, then it might be time to change the team formation and try different ones.

Place the tankiest heroes in the front

No matter which team formation you are choosing, there will be a Rear, Mid and Front lane. All of them are designated for certain classes / heroes, so I suggest that you never place your damage dealers in the front and tanks at the back, as that will do you absolutely no good.

A proper team will have a tank, at least 1 good AoE damage dealer and someone to sustain (a support). Now you can of course go with any team that you have at the moment, so if you have a good 5 star mage, you will want to build around that.

But for now what you need to think about and take into consideration is that you should always place the tanks in the front, and the squishier units in the back.

Place units which have Team Synergy

There are several team synergies out there, and if you want to really have a good team, then the ideal would be to gather units of these elements and deploy them together for an added boost to some stats.

You can see all of the team synergies in the game when you are in the boss challenge pop up, and there, on the left side right above team formation, you will see the Team Synergy button. Tap on it and start checking them out – maybe you can form something with the current units that you have!

In my opinion some of the strongest synergies are the following:

Either way, the best synergies are the ones which include the Dark and Light heroes, but the others can be good as well. So just give them a read and try to assemble something that has a good team synergy.

Save Gems to get more heroes

You should always be trying to complete as many tasks as possible in order to collect more Gems, because with 2000 Gems you will be able to summon 10 heroes. That should be something that you do as early as possible in the game, because it will let you pass the stages a lot faster.

So try to save up 2000 Gems and then head on to the Summon menu. There you will select the 10x Grand Summon and it will most likely give you some very good heroes (that’s how I got my first 5 star character, Ares).

In my opinion that is the summon which is worth doing the most, until you have collected 5x 5 star characters to put together in a team. That should be the key to passing most of the stages – that, and upgrading your heroes. So I suggest that you invest first in gathering the best heroes that you can, then you can spend the Gems on other stuff.

Try to get new Relics and equip them

The Relics are something that will give your entire team a boost, and you can obtain them by doing some easy tasks, such as passing stage X or purchasing X amount of items from a shop.

You can find the Relics in the bottom side of the screen in the Relics menu, or in the main game interface on the left side (they have a weapon image) and they will require you to complete 4 tasks to claim the item. Then once you have completed all the items you will receive them and they can be equipped in the Boss challenge interface.

Try to equip the Relic which works best with your team because that way you will have a much stronger team synergy.

Do all of your daily missions

There are quite a lot of missions in the game, and you should try to complete all of them every single day because the rewards they give are definitely worth it. You can find various missions, so let me walk you through all of them:

There will be some rewards which you can claim every day for free for simply staying online in the game – they can be found in the top left corner of the interface, in the Preview button. They are super worth it, and if you claim them all, the last one of them will give you 5 Grand Summon Scrolls (and 350 total Gems).

The Stage Rewards will give you various rewards for passing certain stages of the game. From these you will receive items such as gears, heroes and hero shards, and most importantly, 5 star hero shards.

The To Do List is located in the top side of the screen, on the left of the minimap. Tap on it and you will be able to see all the tasks that you need to complete in order to claim various rewards. I suggest that you give them a look because they will definitely come in handy especially if you want to make a lot of Gems fast.

The game will have some daily login rewards, so if you want to really benefit from all the free goods you can get, you should never miss a day because the rewards get increasingly better and better.

So I suggest that even if you are not planning on playing the game particularly much that day, you still log in to claim the rewards daily.

One of the most important things in the game is how good your heroes are, compared to the enemy heroes. You should always try to upgrade your best heroes first, especially if you have a 5 star one.

Head on to the Heroes tab and there you can tap on a hero which you want to upgrade then select the Level Up option which will raise the hero’s level. Once your heroes have reached a certain level, they can be upgraded and they will receive a new skill.

The better the heroes’ grade, the better skills and stats they will have most of the time. So make it a priority to upgrade your best heroes first, then the rest – because that way you are not wasting Enhancestones for useless heroes.

Gear up the heroes

The heroes will be able to equip various gears, but since they are not all that easy to come by, you should make sure that you equip the best items to the best heroes first. Then you can go ahead and give some gears to the rest of the team – whatever you do, just focus on the best heroes first!

Check out the Elf Shop daily for cool offers

In the Elf Shop you will be able to find some pretty good offers every day, which are gonna help you save quite a lot of currency if bought at the right time.

For instance, you should always keep an eye on the items which have the discount tag on top because they are the items which are most worth buying (no matter if they go for Gold or Gems). So just remember to take a look at the Elf Shop items daily and do the free refreshes to get new ones.

These would be all of our Elora’s Raid tips and tricks that we have for you right now! Do you know some more cool game tips and tricks? Feel free to share them with us by leaving them down in the comments section below!