When the world is plunged into peril, there is only one agent who is skilled enough, sleek enough, and sly enough for the job – enter the most advanced arachnid to ever grace the Earth: Agent 8!

Spyder is a new 3D platformer featuring Agent 8, a robotic spider that is built with all of the latest tech and gizmos known to man. This little superspy is more the capable enough to stop the world’s destruction, and he is counting on you to help him out.

As Agent 8, players will crawl and explore full scale and beautifully detailed environments like space stations, industrial complexes, secret research bases, and more awesome spy locales. Thanks to his size and agility, Agent 8 and crawl on just about anything, letting players roam free.

Of course, Agent 8 is backed by an arsenal of hi-tech gadgets to help get the job done. Using the multitool equipped in his shell, he can pull levels, plug into jacks, grapple onto surfaces, and more!

The British Spy Agency has left Agent 8 in your capable hands. Will you answer the call? Spyder is available now as an exclusive Apple Arcade game. 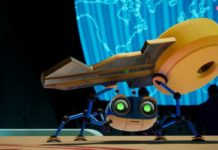