Home Game Guides Edge of the World: Tips and Tricks 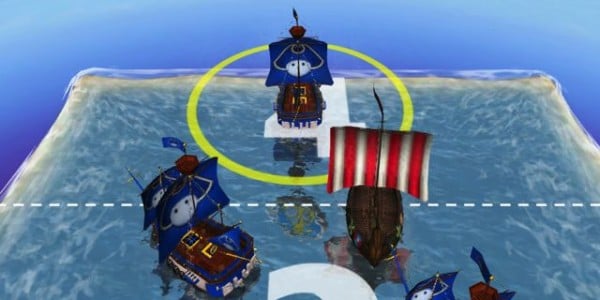 Central Core Studios’ charming new iOS game Edge of the World is a fun asynchronous multiplayer game you can play with friends and family without even having to be in the same room. The premise is simple: players must take turns launching their ships down a straight path of water, accruing more points the further they go. Sail too far however, and you can accidently send your ship careening over the game’s titular edge of the world, forfeiting your points in the process. Below, I’ve included some handy tips and tricks to help you get your sea legs and steer yourself towards victory.

The captain you choose and the optional powers you pick at the beginning of a match can have a drastic impact on how the match plays out and can actually be the difference between a close victory and crushing defeat. Powers like Seamon El Sailor’s “The Queen’s Love” or Jolly Roundbeard’s “Raspy Punchers” can help you accrue a lot of points quickly if used at key moments and optional powers like “Redo” or “Princess Push” can help turn a disastrously-played turn into a salvageable win.

When lining up your ship for launch, remember that you can let the two circle reticules which determine shot accuracy swing back and forth as many times as you need them to. You can also “cancel” a launch by slowly moving your finger back to the center of the reticules if you’d rather re-adjust your angle or if you accidently ready your launch prematurely. Plus, since multiplayer is asynchronous, you don’t have to worry about your opponent getting impatient (or at least not as much as you normally would!)

While playing single-player games against A.I. opponents may not be as thrilling as playing online, it is highly advisable to play at least one or two single-player games in order to acclimate yourself with the controls and get a feel for how the game’s touch-based launching mechanics work. The default captain Skippie Skipper offers a nice balance of beginner powers plus it’s a lot less embarrassing to accidently fling your ship over the edge of the map on your very first turn if you’re playing against an A.I. opponent…

Only One Device? No Problem!

In addition to the online asynchronous multiplayer, Edge of the World also comes with a “Pass and Play” mode which allows two players to take turns playing a game on the same iOS device. Playing Pass and Play with family and friends is a great way to hone your skills and accrue currency when your online friends aren’t around. Plus, it’s so much more satisfying to be able to gloat over your victories in person isn’t it?

With these handy tips and tricks, you’ll be a master of the seafaring ways of Edge of the World in no time. While it isn’t the most complex or “mature” of iOS games out there, Central Core Studios’ fun new shuffle-board-esque title can provide hours and hours of both local and online multiplayer fun for players of all ages.

Edge of the World: Tips and Tricks