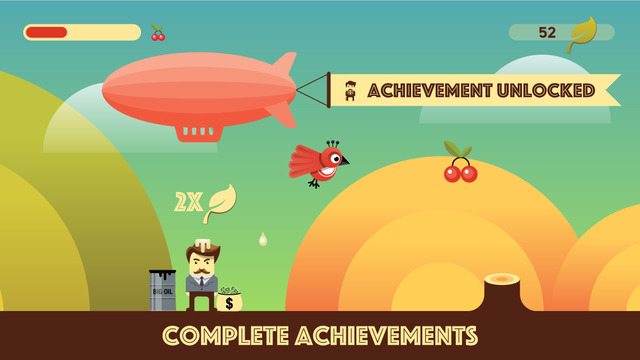 A certain band of birds are tired of having their home exploited for big companies. Enter the Eco Birds, a group of feathered freedom fighters. Help them conquer the skies and drive out the evil corporations like the big oil, deforestation, and toxic polluters! We’ll help you protect the lands with our Eco Birds cheats, tips and tricks strategy guide!

1. Poop on people and stumps only!

Remember that (for now) you have limited amount of poops, so try to conserve them by only pooping on the things that matter. You get eco points every time you poop on a bad guy or a tree stump, so aim for those. Remember that you kind of have to “pre-fire” your poop in order for it to hit your target! Also, keep in mind that you can still jump even if you run out of poop. There just won’t be any poop, obviously!

The starting bird you get is Cuckoo Cate. Each bird has their own unique ability, and Cate’s ability let’s her glide. If you tap and then hold without letting go, Cate will begin to glide. This will slow her descent, and it’s useful for covering long stretches of ground without expending poop to jump. Try utilizing it as much as you can!

If you look at the costs of the additional birds and compare that to how many coins you usually get in one run, you’re probably going to wonder how you’re going to get that many coins. Fear not! Eco Birds has achievements that you can check from the title screen. They’re not overly complex, so don’t worry. Most of the time you will either have to revive a certain amount of trees or poop on a specific amount of people. These achievements get harder to do as you complete them, but they become worth more coins so keep at it!

Which bird you buy next with your coins is ultimately up to you, but we found that they all have their own strengths. Timmy Tucan’s ability is a passive double coin bonus, which makes earning coins a bit easier. Chris Condor’s ability grants him infinite energy, meaning you never have to worry about running out poop. Buzz the Eagle lets him charge up and unleash a mega poop. The latter two birds make clearing achievements easier, while Timmy lets you collect coins at an increased rate.

That’s all for the Eco Birds. But don’t give up the fight! If you have any other tips or tricks to stop the big companies, let us know in the comments below!