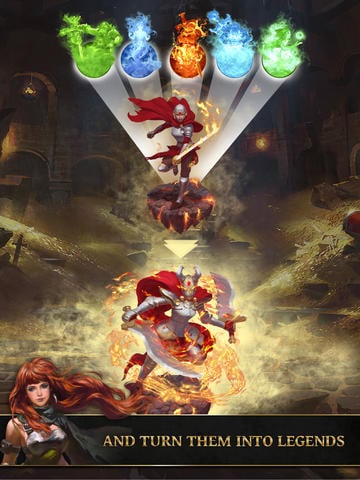 Dungeon Gems is a brand new free to play puzzle/ role playing game developed by Gameloft. Being a somewhat complex game, with a lot of different mechanics, it’s quite easy to get lost during the game. Fear not, adventures, as this Dungeon Gems Cheats: Tips and Tricks guide will help you understand the game better and become a pro at it.

Each of the game’s dungeon comes with its own specific elemental so make sure to organize your team so that most of your team is made up of the elemental that is strong against the dungeon one. If you’re entering a Plant dungeon, make sure to bring as many water characters as possible.

The reguler enemies of Dungeon Gems are not too difficult to defeat, but bosses definitely are. For this reason it’s very important to enhance your character as much as possible by sacrificing cards you do not use. Don’t use essence cards, as they are used for evolution.

Evolving a card raises its rarity level and sends it back to level one with all the previous stats intact, meaning that it will be possible to power it up further, as a card can only be evolved after it has reached the maximum experience level.

Rare cards are more powerful versions of regular cards. In order to get them, you will have to do elite portal summons as well as complete limited time events. During these events you will also have a higher chance of obtaining essence cards, which are used, as stated above, for evolution. These dungeons, however, are a bit more difficult than regular ones so make sure to be prepared when trying to take them on.