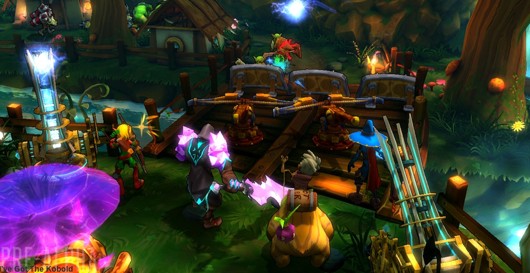 The sequel to Trendy Entertainment’s popular tower-defense game Dungeon Defenders, which is set to launch on a number of platforms including iOS, was originally going to come with an additional competitive game mode similar in concept to many popular MOBA games. However, in the wake of player feedback, Trendy Entertainment has decided to cut the MOBA mode and focus instead on what made the first game such a hit: cooperative tower defense gameplay.

In a press release that was sent out yesterday, Trendy Entertainment’s marketing director Phillip Asher talked a little bit about the team’s decision to abandon the competitive MOBA elements: “We realized we needed a shift in our development focus. We had strayed from making the kind of game fans wanted and the kind of game we wanted to develop.”

Dungeon Defenders 2 was first announced back in March along with its new competitive MOBA-esque mode which would have two teams of five players competing against each other. When Trendy Entertainment allowed the public to try out the new mode, player reception was mostly negative so they decided instead to simply cut the mode and focus on what fans *did* enjoy instead of sticking to their guns at the risk of alienating their fanbase.

Trendy Entertainment currently plans to soft launch Dungeon Defenders 2, which will be a free-to-play title, next spring. The game will initially be available on PC but a mobile iOS version is also in the works.