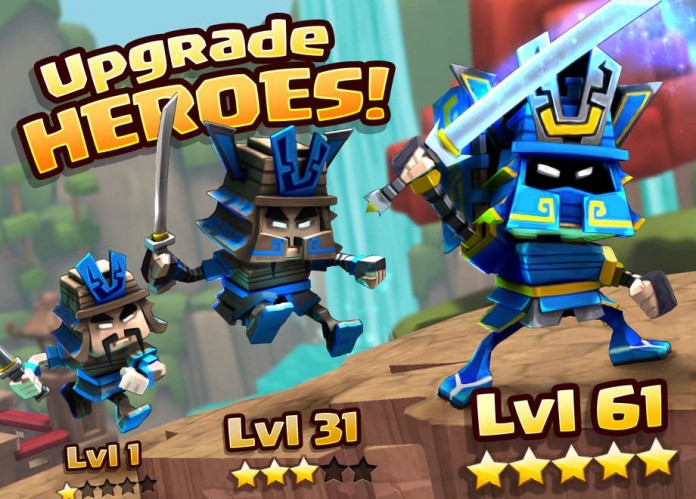 Big Fish Games has just launched an extremely charming and well made RPG for the iPhone and iPad – Dungeon Boss. The game is pretty straightforward, but some tips and tricks never heard, especially since we might be able to give you something you didn’t know already. So let’s give it a try with Touch, Tap, Play’s Dungeon Boss cheats, tips and strategies for real heroes.

From getting more heroes faster to defeating those seemingly impossible stages, we’ve got it all for you here so let’s not waste any time and let’s check out the Dungeon Boss tips and tricks below!

1. Master the elements
The game follows a rock, paper, scissors mechanic and you should always do your best to take advantage of it. Red deals more damage to Green, Green deals more damage to Blue and so on. If you can’t remember the elements, you can always tap the basic attack icon on the screen for each of your heroes and look at the arrows above the enemy heads: green arrow means normal damage, double green arrow means extra damage and red arrow means reduced damage. Have this in mind and you will get the upper hand in all battles!

4. Save your XP Potions
You will, every now and then, get some rare heroes from the summons or by progressing through the game, and that’s when having a few XP potions stacked up is really helpful: use them on your newly recruited heroes to level them up fast and play a few easier, older stages to max them out and have them running at maximum power.

5. Don’t forget about your abilities
Always level them up as soon as you gain a new level. Also, always have some gold coins saved up for when you ascend a new hero: you will unlock some new abilities and you can level them up all the way to your maximum level if you have the money. Make sure that you do!

6. Save your potions!
It should go without saying, but here you go: make sure that you save your potions for when you really need them. If you’re at the last stage in a dungeon and about to defeat the boss, it might be better not to use a healing potion and risk losing a hero (but have the chance of him or her staying alive).

7. Attack weakest enemies first
The goal in each battle is to finish off your enemies as soon as possible. A dead enemy is an enemy that deals no damage, so make sure that you attack the weakest, easiest to kill enemies first. Plan your attacks wisely and have as few enemies standing as possible after each round. Also, if they are present in a fight, healers should be your first target to prevent them from undoing all damage you’re dealing.

8. Add friends and use their abilities
Having friends in Dungeon Boss is extremely useful. You can tap the friend button and bring a friend’s hero in to help you. You can check out their heroes’ special skills and you should always pick the most useful. However, have in mind that you can only use one friend per Dungeon and you can only use the same friend once per day, for free. That’s why having as many friends as possible is extremely useful.

9. Replay stages
Make sure that you always have all your heroes running at maximum level (your level). Replay older stages to level them up and get resources and hero shards. Also, increasing the number of stars for each hero is essential in the long run: tap you heroes button in the main screen and tap each hero to see how many stars they have and what stage(s) drop tokens to increase their star rating. Replay those stages only – you will need to play them for hundreds of times to get your first star only, but it’s worth it! Always pay attention to the stage rewards and play according to your needs.

This would be it for now. If you have other tips and tricks for fellow players, let us know by commenting below.