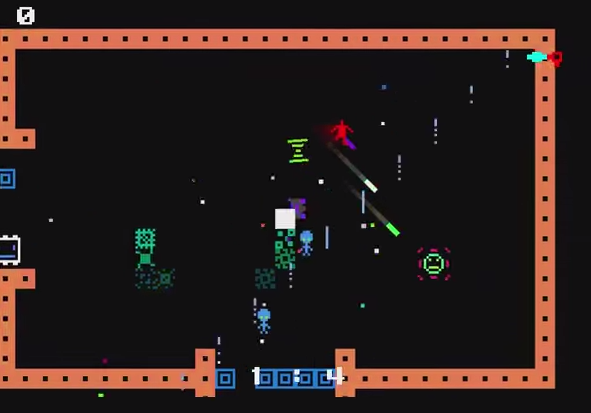 If there’s something that has managed to become quite successful on the App Store against all odds are the several old-school inspired games. This is also thanks to some really good gameplay design ideas, which have managed to elevate these games from being simple nostalgia cash-in titles.

A new game like the ones mentioned above has been recently announced by iOS, an arcade shooter that is being developed by a team that’s quite fond of retro inspired games.

We’re talking about Arecibo Man, currently in develeopment by Madgarden. Like many other games developed by the team, Arecibo Man is going to feature a dinstinct retro look. Even the gameplay experience has been heavily influenced by some true classics like Robotron and Berzerk, just to name a few.

In Arecibo Man players will be shooting at a lot of enemies in each stage, using dual sticks as the control method. The gameplay experience looks incredibly hectic and though, just like in those classic games that were all the rage 25, 30 years ago.

As the game is still in development, not much more is currently known about it. The basic gameplay experience will surely be enhanced by the time the game is out with some extra features that will make fans of the retro styled arcade games quite happy.

Arecibo Man launches on a yet to be confirmed release date on the App Store. We’ll let you know more about the matter and the game itself as soon as more news come in on it so stay tuned for all the latest updates.