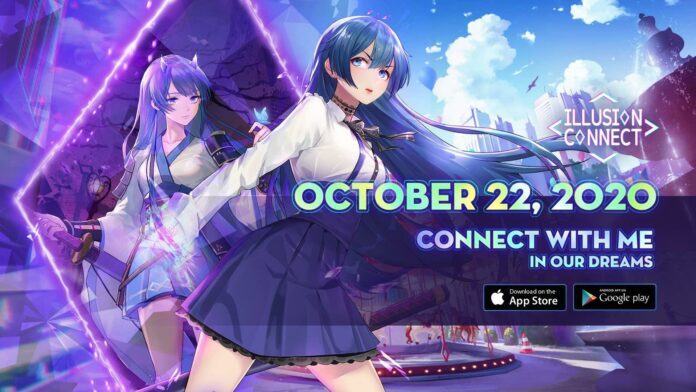 Super Prism Games has released a brand new teaser video for its upcoming tactical gacha RPG Illusion Connect. That alone should be enough to get you excited, but the video also reveals a lot of intriguing information about what you can expect when the game launches worldwide later this month.

The video is set in Blossomsea City, and features a couple of characters from the game – Saya and Frantiva. Although, to be more precise, the video is actually set across two different Blossomsea Cities – one in the real world and one in the dream world. Frantiva bridges the gap between the two using the power of a lens, and then all hell breaks loose.

Saya fights for the SEED faction. They’re determined to stop Uroboros from unleashing its terrifying nightmares in the real world. Says despises the nightmares, mainly because she blames them for the murder of her entire tribe. It’s no wonder that beneath her cool exterior Saya is a maelstrom of emotions.

Frantiva fights for Uroboros, but she hasn’t always. She was once an important member of the SEED faction, before betraying her people and swapping sides. Her betrayal is even more shocking when you realise she turned her back on her sister, who’s still a loyal member of SEED.

All sounds pretty darn exciting, right? You’re going to discover even more about the various factions and characters when Illusion Connect launches worldwide on October 22nd. There’s still time to pre-order the game and bag some in-game goodies. You can do that at the official Illusion Connect website, or by visiting the game’s App Store or Google Play Store page.