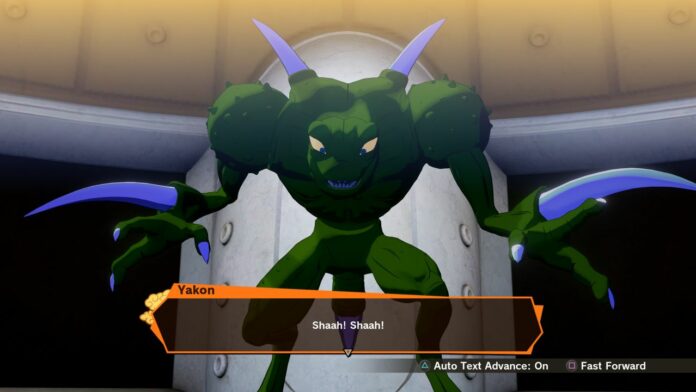 Following the beginning of the new World Tournament in the Buu Saga in Dragon Ball Z: Kakarot, Goku, Gohan, and the other Z Warrior make the acquaintance of Kaioshin, who informs them that the wizard Babidi is aiming to revive the powerful Majin Buu, stealing energy from the most powerful warriors on Earth to power the Majin’s return.

Deciding to help Kaioshin against Babidi, the Z Warriors will have to fight some very powerful enemies before they can get to the wizard. Here’s how to defeat one of them, Yakon.

How to Defeat Yakon in Dragon Ball Z: Kakarot

Yakon is fought once during the Buu Saga, and you will be controlling Goku during a fight that looks easy, but it can actually be pretty challenging without the correct strategy.

Yakon only has two special attacks at his disposal, Cross Claw and Light Energy Absorption, and both are activated from long range. The second also allows him to restore HP by absorbing your Ki ranged attacks, which can be a problem, considering how much HP Yakon has. As such, you want to prevent him from using these attacks by fighting him at close range using regular combos and attacks that can deal stun damage, like Meteor Smash.

Essentially, the fight against Yakon boils down to how good you are at continuing your combos while avoiding or blocking his red charging attack. If you time your attacks right, and use stun damage-dealing attacks repeatedly, you will be able to break him more than once during the fight, giving you the opening needed to unleash Goku’s most powerful ranged attacks, like the Super or Guided Kamehameha or the Spirit Bomb.