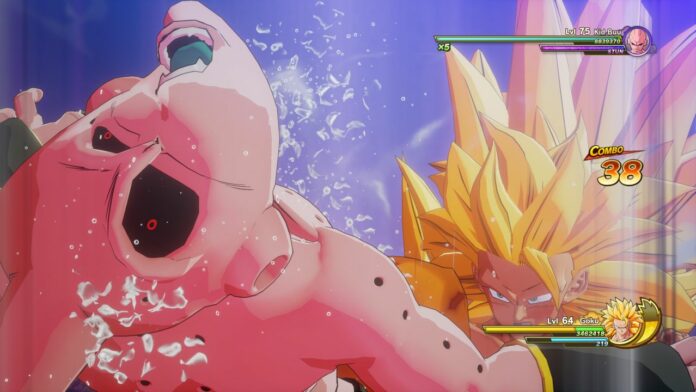 Super Buu is a formidable opponent in Dragon Ball Z: Kakarot, but he is not the ultimate form of the terrible being that Kaoishin set out to defeat at the start of the Buu Saga.

After being utterly defeated by Vegito, Super Buu turns into Kid Buu, an immensily powerful being that serves as the final boss of the entire game. Here’s how to defeat him without too many troubles.

How to Defeat Kid Buu in Dragon Ball Z: Kakarot

You will fight Kid Buu four times at the end of the Dragon Ball Z: Kakarot story, two times with Vegeta and two times with Goku. Kid Buu fights the same way in all four fights, so you can use the same strategy every time you have to face him.

Being the final boss, it is not surprising to see Kid Buu being able to attack relentlessly, break out of combos very frequently and unleash some very powerful special attacks. Given how much the boss breaks out of combos, the best way to damage him is to use abilities that can stun him, such as Goku’s Rock Paper Scissors: Rock and Vegeta’s Massive Strike. The two special attacks are also great to prevent Kid Buu from charging up and unleashing a Kamehameha attack.

As for how to defend against Kid Buu’s attacks, dodging them should always be the way to go. The Kamehameha and Rolling Attack special attacks are easy to dodge to the side, while Candy Beam, like before, can be a little more tricky, due to the strict timing. In addition, you will really need to watch out for Kid Buu’s burst phase, where he unleashes multiple powerful attacks, including Planet Burst, which can be avoided easily by moving to the side and away from the range indicator. After this attack, Kid Buu will be defenseless for a short while, so make sure to be ready to unleash your strongest attacks.

With careful defense and optimal offense, it will not take much to defeat Kid Buu. He is the final boss of the story, so defeating him means completing Dragon Ball Z: Kakarot but if you haven’t had enough, you will be able to take on some more explosive challenges that are part of the expansions.