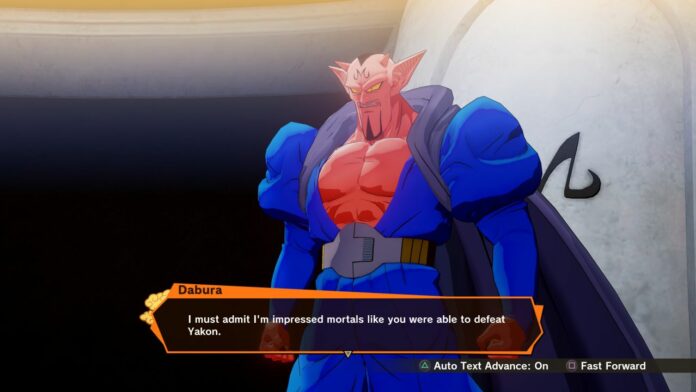 Among the henchmen that follow Babidy in the Buu Saga in Dragon Ball Z: Kakarot, Dabura is, without a doubt, the strongest.

While his strength is far from being on the same level as Cell’s, Gohan may still have some trouble taking him down, as he neglected his training in the years following the defeat of the fearsome android, falling behind both Goku and Vegeta.

Here’s how to defeat Dabura and which special attacks to look out for.

How to Defeat Dabura in Dragon Ball Z: Kakarot

You will fight Dabura only once during the Buu Saga using Gohan. Like the fights against Pui Pui and Yakon, this battle is quite straightforward, but the high attack power and relatively high HP of the enemy can drag the fight for a little too long.

Dabura is only able to unleash two special attacks: Dark Sword Strike and Flame Blaster. The former is a fast-charging attack that deals very high damage, while the second is a fast projectile that can be difficult to dodge due to its surprising high speed. As both moves require extremely precise timing to dodge, it’s better to block them if you are not feeling confident, given they both deal a lot of damage.

Like many other bosses, Dabura also breaks out of combos quite often, so avoid unleashing finishers if you are not sure they will land properly. A red aura charged attack will always be followed by a special attack, so do not take risks and play as safely as possible.

As Dabura has very high HP, the battle may last longer than expected, but a decent stock of healing items and the proper defensive strategy will help you make it to the end.