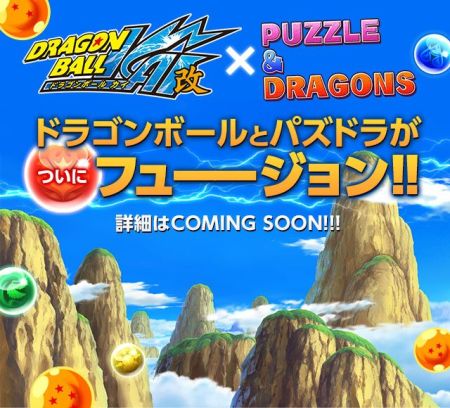 A new Dragon Ball – Puzzle & Dragons cross-over project has been revealed only last week by Gung-Ho. Today the first details on the project have emerged as well as a Japanese release date.

Puzzle & Dragons Dragon Ball Z Kai is going to feature several of the series characters. Among the available enemies will be characters seen in the Frieza story arc of Dragon Ball Z like the Ginyu Squad, Saibamen and Frieza himself.

Just like the many monsters that can be captured in the game, players will be able to use characters from the series and make them evolve into different forms. It will be possible to make both Son Goku and Son Gohan go Super Saiyan during the course of the game, allowing them to obtain extra power to deal with their enemies.

Gung-Ho has also confirmed that the game will receive a special dungeon including all the Dragon Ball Z Kai related content but actual details on the dungeon have yet to be confirmed.

Puzzle & Dragons Dragon Ball Z Kai will launch in Japan on June 2th. We currently don’t know if the collaboration will be released in the West but, considering how popular the series is in the West, there’s a high chance that we will soon be able to unleash a devastating Kamehameha on enemies in the game. We’ll keep you updated on the matter as soon as more comes in on it so stay tuned for all the latest updates.