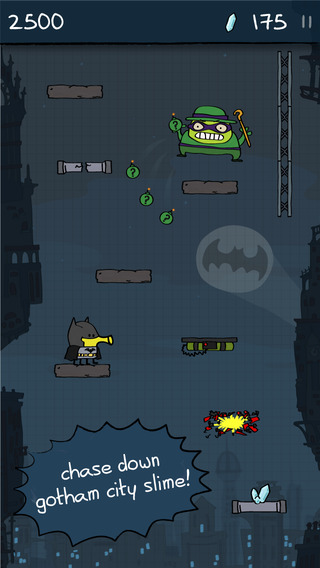 A new version of the successful game Doodle Jump has been released today on the App Store in Europe and UK, allowing gamers to control one of the more popular characters created by DC Comics.

Doodle Jump DC Super Heroes also features some  boss battles where players will have to launch batarangs at the enemy while avoiding a variety of attacks, adding some variety to the gameplay experience. Luckily even more variety is introduced by the many updates included in Doodle Jump DC Super Heroes, which will allow players to purchase new gadgets that will help them during the game.

According to the publisher, the Batman episode of Doodle Jump DC Super Heroes is only the first release of many so we should expect more episodes starring other DC Comics characters very soon.

Doodle Jump DC Super Heroes is now available for download for free on the App Store in the UK and Europe. The game isn’t exactly the most deep experience available on iOS device but it’s still good enough to kill a few minutes on the go.