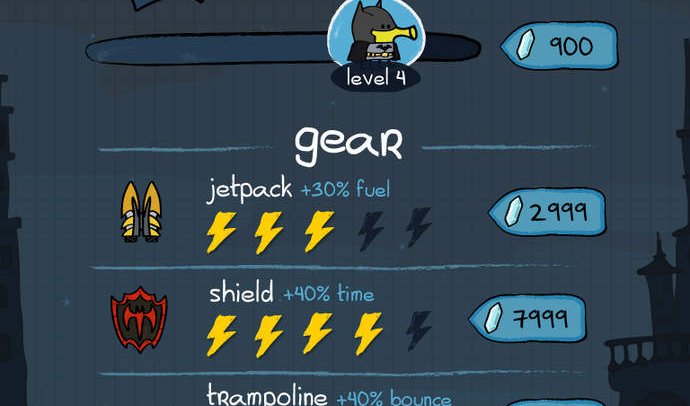 So if you are having trouble defeating Bane, The Joker and all the other enemies and you want to get farther in the game, our Doodle Jump DC Super Heroes tips and cheats might help!

Learn to glide
Swiping up on the screen when jumping not only give you a smoother landing and more time to reach the platform, but also gives you a bust upwards, making it easier to reach high platforms. However, the cape glide will also repel bombs or whatever projectiles the enemies throw at you, so it’s one of the things you should do your best to master if you want to get far in the game.

Control with one hand
You actually need to use two hands to play the game, but learn to control the directions using only one hand, leaving the other for shooting. It’s pretty difficult at first – especially aiming and doing it all: jumping, landing on a safe platform and shooting, but with a bit of practice, you will get there. If you manage to control your character with one hand only, things will be even easier!

Learn to shoot properly
Shooting is not as easy as I would like it to be in Doodle Jump DC Super Heroes, and that requires a lot of practice also. Your weapon works as a boomerang and will follow you when you move, so it’s a perfect idea to shoot and while landing, move in the required direction in order to take out your enemy. This might sound easier than it actually is, but it’s the only way to do it. Of course, when it comes to smaller enemies, it might be a better idea to simply avoid them and keep on going upwards – it’s clearly better than risking your life.

Upgrades
You will need quite a few crystals in order to get all those goodies in the game, and some upgrades are, in my opinion, better than the others. Below is the order in which I suggest you purchase the upgrades:

– Batcopter (since it gives you the biggest advantage, carrying you upwards)
– Jetpack (similar to the Batcopter)
– Shield (it won’t stay on forever, but it’s nice to have one every now and then)
– Trampoline (probably the less useful since you can jump without it, too)

I really see no reasons to purchase a head start (very expensive) or spend crystals to level up. Just play the game and you will level up easily – keep your crystals for upgrades and nothing else!

Getting used with the controls and shooting and paying attention to where you land will take some time, but I am sure you will get there fast and if you follow our tips and tricks, you will take out all the enemies faster. If you have other tips and tricks for the game, let us know by commenting below!