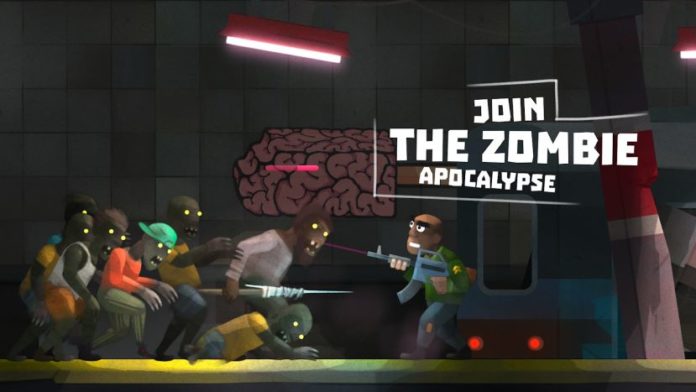 Colonel Don steps into the desolate city. A zombie infection has taken over the world, and it seems like the end of humankind is approaching. A normal person may have given up by now, but Colonel Don is about to take matters into his own hands. He will not stop until every last zombie has been wiped off from the face of the Earth in Don Zombie!

As Don advances, his path forward will be blocked by purple tentacles. These cannot be crossed, and to make them go away you must deal with the current enemies that spawn. Be aware of where these tentacles are make sure you leave yourself enough room to work with.

Taking down zombie is easy as manually aiming for tapping the aim button for a quick shot. Quick shots are useful for the smaller enemies that are harder to hit, while manual aiming should be done with zombies.

The reason being is that zombies take increased damage from headshots, so you always want to be aiming for the head. Taking out zombies quickly is the best way to keep yourself safe!

Getting all Three Stars

To avoid taking excessive damage, always stay on the move and keep backing away from zombies. The little critter enemies have different attack patterns, but stay calm and you should be able to dodge them.

For example, the little spider guys will crawl towards you until they are close, then they will jump into the air and attempt to land on you. You can easily walk under them and get some space away to avoid their attacks.

You also have the Star Chest to work towards. Once you obtain enough stars, the star chest is yours! It contains a large amount of gold and cards, with some of them being rare and epic cards.

Don will start his vengeful journey armed with only a simple Pistol, but it gets the job done early on. Weapons have two main stats: damage and capacity. The higher the damage, the quicker you can take out zombies, and the capacity shows how many shots you have before you have to reload.

There are more hidden stats to consider as well. The automatic rifles like the M16 are full-auto which lets you fire rapidly, and the shotgun has a lot of knockback to it which makes it perfect for creating lots of breathing room.

Each weapon has its own strengths, so you will need to experiment with them all to see which one you like the best. Guns also have a rarity indicator to give you a general idea of its strength. From weakest to strongest, it goes common, rare (blue), epic (purple), to legendary (orange).

Don can also bring gear with him into the levels that can give him an even deadlier weapon against the zombie hordes. Gear is super powerful, but they have long cooldowns so you must use them wisely.

Don starts out with the old classic grenade, which he tosses in an arc and it explodes upon contact, dealing heavy damage to any zombie caught in the blast. Later on you can unlock gas tanks, molotovs, and more. They are all pretty good and almost all of them are useful in any situation, so you cannot really go wrong here.

Upgrading Weapons and Gear with Cards

As you complete levels, you will earn chests. These chests must be put in one of your opening slots, and you have to wait the allotted time before the chests open. You will get gold, some boosters, and most importantly cards.

You start out with two unlocking slots, with an additional two available for purchase with crystals. You have one “holding” slot – any earned chests will go here. Beware, as earning a chest while already having a chest in the holding slot will replace it. Be sure not to accidentally replace epic chests!

Taking Down the Big Bosses

At the end of each act, you will go toe-to-toe with a large, mutated zombie. These guys opt to smash you with their gigantic arms instead of eating you, and if you are careless they can take you out in a few hits.

The boss at the end of Act 1 is a little easier than the future encounters, as you have the rolling tank armor to help you out. You can take a few more hits than usual before you go down, so it should help you get used to the boss fights.

The bosses’ main attack method is to simply approach you and slam down on you. You can avoid this by simply walking past the boss – touching them does not deal any damage to you.

Once you get to the boss of Act 2, you will have to face him on foot. Stay calm and just watch the boss closely. If they are not walking up to you, they are probably jumping after you, and you must watch out for this attack as it is their most damaging attack! If you see the boss jump into the air, there is small pause before they slam the ground.

This attack deals an immense amount of damage so you need to keep your distance at all costs. Remember to quickly walk past the boss when you run out of room to continue your assault.

Come Back for Freebies

Once every day, you can collect free gold and crystals from the store. You will need lots of crystals in order to unlock more chest slots, so be sure to check in to get your goodies.

You can also claim daily gifts. In the daily section, there will be three items for you to collect over the course of the day. These gifts will refresh throughout the day, so check in every now and then to get some more freebies.

Every time you collect a daily gift, the meter at the top will fill up. When it is full, you will earn a special chest that contains some sweet rewards in it, including gold, crystals and cards!

That’s all for Don Zombie! If you have any other tips or tricks to share, let us know in the comments below! 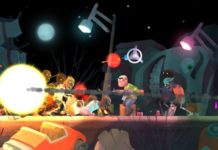