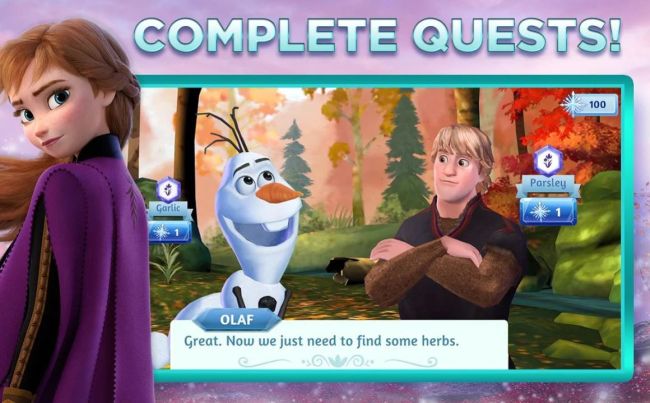 In today’s article we are going to cover all of the Disney Frozen Adventures tips and cheats and help you better understand the game so that you can pass more levels easily!

In this beautiful Disney game, you will be joining Elsa and Anna in decorating their beautiful castle and unfolding the story which lies beneath. As you will progress and pass more levels in the game, they will get harder and harder, so that’s why we are here – to help you get out of some pretty tough situations!

So therefore let’s not waste another second and dive right into the Disney Frozen Adventures tips and tricks right here below and help you pass more stages in the game!

Keep track of your moves at all times

You will be able to do as many combos as you want in the game, but one of the most important things which you should always keep track of is your moves and the level’s goals.

You should always try to complete the game’s goal within the number of moves that you have, because this will mean that you are going to pass the level and receive a star which you can use to decorate or progress further into the story!

The number of moves that you have will be shown in the top left corner of the screen while you are playing a level, and right underneath it you will have the level’s objective. I suggest that you always try to reach this objective within as few moves as possible, because the extra moves you have left will count towards some extra Coins in the end!

One of the best things which will help you clear out the stages faster than anything else is to create tons of combos in the game and use them to help you reach that level’s objective much, much easier!

The special tiles will be created when matching more than 3 blocks, and depending on how you match them (the direction in which you match them) or how many tiles you match, you will receive different boosts. But if you’ve played match 3 games before, you are probably very familiar with this already – if not, here’s how you create the special tiles:

You should always be on the lookout to create more of these, because they will not be super hard to create and if you pay attention to the pieces that you are forming and how they align with the rest, you will make tons of special tiles to help you pass the levels easier.

Now this is something that is going to help you by a lot! A lot more than the simple special tiles, because it will be matching two special tiles together in creating a super special one! This will make a combo between the two, so for example if you match the multi colored snowflake with an ice bomb, it will spread a multitude of ice bombs all around the board which will explode immediately, clearing out the board pretty much!

By doing this you will not only save a ton of moves, but it will help you a lot more than a normal boost will, because it has a much greater impact.

Make tons of matches for extra points – or save your moves

In order to collect more Coins, you should try to always make as many matches as you can, because they will increase your score. This is a little something which I have found useful in helping me make more Coins, but there is another way that you can do that as well – by making as little matches as possible and passing the level fast!

When you make a lot of matches: this is super useful, but it will use a few more moves than you would normally use when just going towards completing the normal level objectives.

When you make as little matches as possible: by doing this you are basically doing every move in order to reach the level’s objective ASAP, but it can have a downside – you might not finish within the moves given if you don’t try for some super tiles matched. Either way, if you try this, then you are trying to conserve the moves to get more points.

No matter which way you are trying to go, I still suggest saving some moves because they will turn at the end into special tiles and spread all across the board, which will result into more coins!

Complete the quests to unlock chests

This game will have certain quests, just like many other games out there do. However, you do not have a list of them, and instead you will have a progress bar which gives you quests as you finish them.

The progress bar on the top right side of the screen will show you your current progress in the area in which you are at the moment. There will be a lot of tasks, and they will each give you a certain % added to that progress bar when you complete them.

By reaching the milestones within that progress bar you will receive chests which contain useful loot, such as infinite lives for a while (30 minutes, 1 hour and such), Coins and even boosts which will help you out in dire situations!

So I suggest that you try to complete the objectives which appear because you’ll definitely benefit from the chests!

Get a free hint for a possible move

If you ever find yourself stuck during the level and simply can’t find (or can’t decide) what move to make next, you don’t need to worry! All that you can do is wait a couple of seconds and the game will give you a free hint!

The way that this will show is that the game will subtly jiggle the tiles which you can make a match with, so you just need to wait until this happens!

There is however a downside to this – the game will show you A RANDOM match which you can make, so sometimes there can be other, better matches which you can make and if you miss making them, you might not be able to make them again. Just be careful and think about how the moves that you make will affect your future moves.

Change the decors as you wish

If you’ve played the game for a bit, you must’ve noticed that you will be able to decorate the various places in which you are, as part of the quests. Well, one thing which you can also do to help you make the place more likable is to change the decorations as you want!

No matter if you have chosen by mistake a decor, or if you got bored with the one that you chose and want to change it, then all that you have to do is tap and hold on to that decoration and the menu to switch it will appear once again!

Are you stuck? Use the power ups!

There will be a few types of power ups in the game which will help you in situations where you are having a hard time passing the stage and reaching that level requirements. When that happens, you shouldn’t forget that there are two types of power ups in the game: the ones which you choose right before you start the level (also can call them boosts), and the ones which you can find within the level.

I suggest that you use the boosts only if you’ve already played that level before and know that it is kinda difficult to finish it without an extra helping hand from the boosts (which should help give you a good head start). As for the power ups which you can find within the level, you should use them in case you have about 1 move left and 2 things to obtain towards level objectives.

Basically these power ups are there to help you in case you are stuck, so let me give you my advice:

– Use the power ups at higher and more difficult levels, don’t waste them at the beginning because you will have a much better use for them later when you get stuck.

– Don’t use the power ups or boosts while you have infinite lives because even if you fail the level, you can re-try for free – for sure you will pass it eventually.

– Try to think ahead before activating the boosts and power ups, because the more you progress, the more you might need them – so don’t waste them!