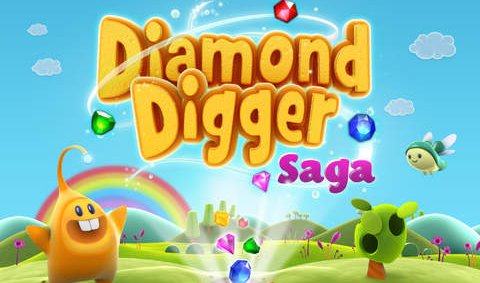 A brand new puzzle game has been launched on the App Store by King – Diamond Digger Saga and we’re here to learn how to play the game and how to score the three star ratings on all levels without having to empty our pockets for extra moves and power-ups. In other words, I am here to share with you a complete set of Diamond Digger Saga cheats and tips to create the ultimate strategy guide for this amazingly addictive game – just like all the other games by King.

So if you’re having trouble saving the toys, waking up the Fireflies or just getting all the stars per level, check out out Diamond Digger Saga tips and tricks and hopefully you’ll do a lot better!

1. Use the Color Burst smartly
Probably the biggest advantage that you can get in Diamond Digger Saga is the Color Burst, which fills up automatically as you create matches in the game. Usually, using it as soon as it fills up to take full advantage of future matches is the best idea, but if you are just about to complete a depth level and head on to the other, it’s better to wait as the Color Burst is usually most useful early on in a new depth level. Either way, make sure to use the Color Burst as often as possible and make it count!

2. Plan a strategy
Although it might not seem like much, this game is extremely challenging and you won’t be able to beat all levels without a solid strategy. Learn the different types of rocks and how many matches they need to disappear, study the board and plan ahead. You won’t be able to follow your strategy exactly as planned because of the crystal drops, but if you have a plan you are already 50% through with the level.

3. Learn to make matches at the bottom
Probably the most frustrating levels are the Totem levels which will be unlocked pretty late in the game, but they will require you to make matches at the bottom. Therefore, practicing this early on will save you a lot of trouble later on. And this will also help you get used with matching blocks in lower numbers just to meet the requirements.

4. Types of blocks matter!
Although your main goal is to meet the requirements which in many levels won’t have anything to do with the number of points scored, you still need to score a ton of points in order to get three stars per levels. So learn to make the most out of the ground blocks per each depth level and don’t rush your descent to lower levels. Try to unlock as many treasures as possible per stage, especially later on when the ground blocks are worth more coins.

5. Make the most out of the rockets
On many levels, you will have rockets that will help you earn extra points. They are usually placed in a strategic position that gives you more points if you manage not to move them away, but on few occasions it would be best if you tried to move it down a bit. Always look at the rockets, decide if it’s worth the extra moves to ignite them and use them to get a higher score.

6. Exclamation marked items
When you have to rescue fireflies or toys, you will sometimes see exclamation marks above some of these blocks. This means that if you leave the room before collecting that particular block, you can’t complete the level. So if you have them, make sure that you unlock them as soon as possible, so that you can carry on downwards where there are more points to be won.

7. The extra lives cheat
An extremely easy to use cheat in Diamond Digger Saga is to simply go and alter the date and time on your iPhone or iPad. Set the time forward and return to the game to see that you have your hearts bar filled!

8. Extra lives from friends
Never accept extra lives from friends when your heart bar is full. You can’t have more than 5 hearts in the game, and you will simply lose the accepted ones. So instead, wait until you have no more hearts left and only then accept the five oldest from your friends!

9. Replay levels
Sometimes, the crystals simply don’t manage to drop as they should in order to give you a real chance at the three star rewards. Replaying the level over and over again will eventually help you get a better run and get those three stars you’ve been waiting for. The same rule applies for levels that seem unbeatable: let them away for a while then replay until you manage to beat them.

And these would be, for now, our Diamond Digger Saga cheats and tips for the iPhone and iPad version of the game. Do you have extra advice to offer fellow players? Let us know by commenting below!