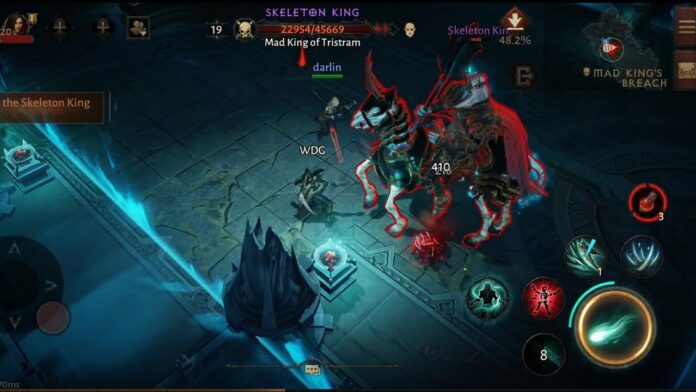 Diablo Immortal is an RPG for mobile devices. This is a new game of the famous Diablo franchise. There are lots of different mechanics and features that you could see in the previous games. One of the most important things in these games is bosses. When you defeat them you can get a decent reward. So, you will need to learn about these enemies, and today we are going to tell you about one of the bosses you can encounter in this game. This guide will tell you about Skeleton King in Diablo Immortal.

Skeleton King in Diablo Immortal is one of the bosses you can encounter at the beginning of your journey. His name is Leoric and this boss is a very iconic character for this franchise. He is present in the game’s story since the first Diablo game where Leoric is one of the first bosses you can encounter in your journey. However, he is really strong and lots of players dropped their playthrough because of this boss.

RELATED: How to Farm Legendary Items in Diablo Immortal

Leoric in Diablo Immortal is easier than his Diablo 1 version. However, he is tough and requires you to be careful with his attacks and minions. The main ability of this boss hasn’t been changed since the first game. He is able to summon a huge amount of skeletons and if you fight for too long then the entire arena will drown in Leoric’s minions. However, these skeletons are not strong and you should be able to defeat them with AOE attacks.

Skeleton King in Diablo Immortal has two phases. In the first phase, he will be walking on his own and trying to hit you with his two-handed mace. Just try to avoid his attacks and hit him back. In the second phase, Leoric will mount his horse. This will make him stronger and he will perform different AOE attacks like dashed and stomps. The strategy is the same as in the previous stage and the only difference is that you need to dodge his AOE attacks.