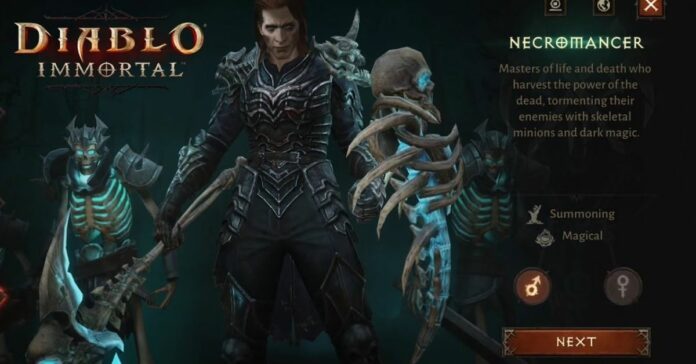 Diablo Immortal is a new mobile RPG that belongs to the famous Diablo series. This game has a few classes that you might have seen in the previous games and today we are going to talk about one of the oldest ones. Necromancer was a very popular character in Diablo 2 and lots of players in the game’s community are happy to see him in the new game. This guide will tell you about Necromancer in Diablo Immortal and his abilities.

Necromancer in Diablo Immortal is a class that doesn’t look different from his Diablo 2 ancestor. The main features are mostly the same and consist of different summons (mostly skeletons) and various damaging and supporting skills that are no match to sorcerer’s magic, but still very useful. So, let’s take a closer look at his arsenal.

RELATED: How to Get Rich in Diablo Immortal

The second category of skills consists of Necromancer’s main abilities. The full list of these is next:

It seems that Necromancer has some good abilities. Command Skeletons is a skill that summons skeletons that will fight for you. Corpse Explosion, Grim Scythe, Skeletal Spikes, and Corpse Lands are good damaging spells that you can use in your build. If you want to get some protection buff, you can choose Bone Armor.