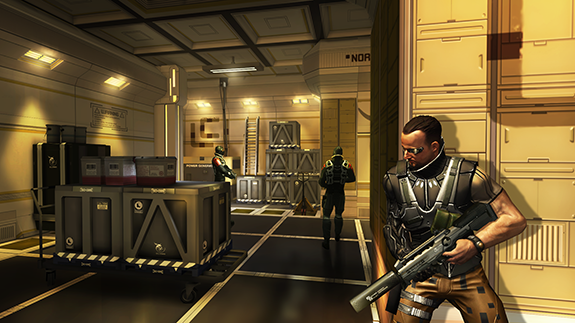 Deus Ex: The Fall isn’t only remembered for being a quite decent game, but also for the constant variation in its price on the App Store.

It looks like the price variations aren’t done yet, as the game is now available for a reduced price on the App Store.

If you want to get the game and want to spend very little to do so, you better buy the game now as it’s currently available for $0.99, a real bargain considering the game’s quality.

Deus Ex: The Fall is a solid and entertaining first person shooter, one the best released on the App Store. Despite an engaging experience, the game still has some flaws like the excessively linear progression and some gameplay situations that aren’t as good as the rest of the game and some bugs that get in the way of enjoyment.

Deus Ex: The Fall also retains some of the elements that have made the series stand out from the competition like stealth and light role playing game elements. Playing the game with a stealth style is extremely satisfying, let me assure you. It’s also required most of the times, as you will be punished for getting discovered.

Deus Ex: The Fall is now available for download on the App Store. The game can be played on both iPhone and iPad.

Deus Ex: The Fall Discounted On The App Store