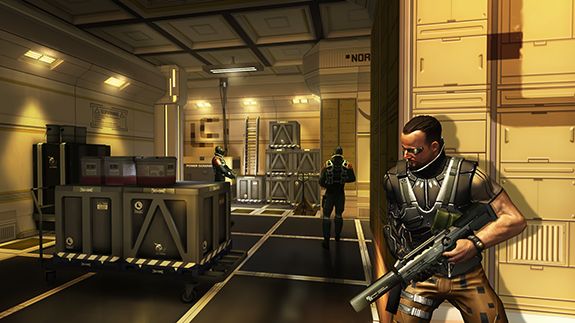 Eidos decided to wear their surprise hat today and pull a really nice one out by announcing that Deus Ex: The Fall, a brand new game set in the Deus Ex universe, will be released on iPhone and iPad sometime this summer. And this is just as good as magic!

Set in 2027, just like the 2011 game Deus Ex: Human Revolution, Deus Ex: The Fall sends us to a golden era for science, technology and human augmentation, but also a time of great social divide and global conspiracy. Ben Saxon, a former British SAS Mercenary who underwent physical augmentation, is desperate for the truth behind the drug conspiracy. Betrayed by his private military employers, the Tyrants, not only is his own life at risk, but for all augmented humans, time is running out… and this is when you step in in what seems a pretty interesting experience best played on iPads (my opinion, of course).

There’s a nice Deus Ex: The Fall announcement trailer that the game’s developers have posted on YouTube and you can check it out below:

Deus Ex: The Fall is a RPG/Shooter mix and hopefully one that will do it right, unlike all the other shooters on smartphones – and there’s just a little waiting left to do since the game will be released sometime during the summer.