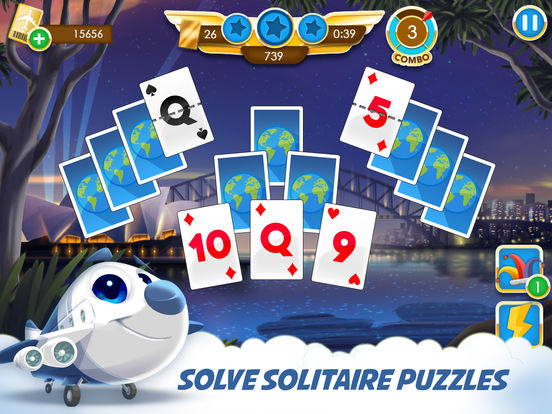 Fill up the combo meter!

Making successful matches on the board will fill up the combo meter at the top right corner of the screen. You’ll need to act fast because the meter doesn’t stay filled for long – it decays slowly over time. The more you match successively, the more it fills, and if you can fill it all the way one card on the board will turn into a special blue card. Matching this blue card will add extra house cards into your hand, allowing you more chances to clear the board! Try to match accurately and quickly to get the most out of this. Be careful though – if you have no matches and you pull a card from your hand, the combo meter will automatically reset back to zero.

Collect all the stars!

Try to collect as many stars as you can. Every star is recorded into your passport, and once you’ve gained enough you’ll unlock a special souvenir that’s permanently added into your passport. Every time you unlock a new souvenir you’ll earn some awesome goodies, including golden tickets, the premium currency of the game, and boosters!

So, as you’ve noticed, you have a great deal of encouragement to blaze through the levels as fast as you can. Don’t go too fast though as you don’t want to miss any potential matches. You’ll notice that after the first two levels the game will stop highlighting potential matches for you and you’ll need to keep a close eye to ensure you don’t miss any. If you draw a house card while there was a potential match on the board, the card in question will rattle to notify you that you missed it! If you so wish you can undo a move, but it costs quite the hefty amount of golden tickets to do so. Additionally you can also activate the Foretelling booster which activates the highlighting again for that level.

On certain levels you’ll have to deal with packages. Packages cover groups of cards on the board, and you’ll need to spend a house card to get rid of the package. You should do this right away as packages can cover a lot of potential matches, and you’ll be missing out on a lot of options if you leave them lying around.

That’s all for Destination Solitaire! If you have any other tips or tricks to share, let us know in the comments below!