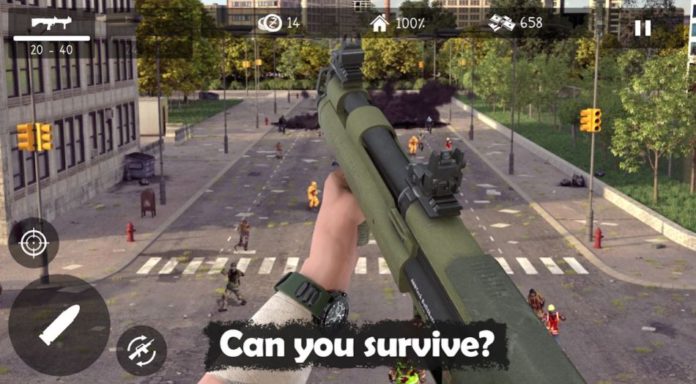 In today’s article we are going to cover all of the Dead Zed tips and cheats to help you take down the zombies as they come, and never have to worry about taking down the enemies rushing at you.

In this game you will be able to prove your aim and shoot down the pesky zombies that are coming to you, but it all becomes more difficult soon, so you will need to improve further and further as you go, so that you can pass the stages faster!

So without further ado, let’s not waste another moment and dive right into the Dead Zed tips and tricks right here below!

It’s detrimental that if you want to take on a lot of zombies you first prepare and learn how to shot (and more precisely, aim) the right way, missing as little as possible. I suggest that the first time you are starting off in the game you take your time and learn how to proper position your aim and gun.

Well, if you are still not sure what I mean there, let me explain a little further, starting with some basic stuff that you should keep in mind:

– You can move your aim (the red circle) using the arrows. Do this to position more accurately whenever you are trying to shoot some new zombie off.

– You will need multiple bullets to actually take one one single zombie at start, until you upgrade your weapons’ damage later on.

– A powerful damaging shot / hit would be at the head, so always try to go for that.

– The more you learn how to position your aim, the more often you will take them down, and the faster also.

– Each of the zombies has a move pattern. Take your time and analyze them and then try to predict where they will walk then, and shoot them.

Start taking the zombies out one by one

You should always try to take them out one by one, instead of focusing on multiple zombies all at once. I suggest that you take out the zombies like that, because that way you will have less enemies to look after.

By taking them one by one, you will have less zombies to worry about as they come, so make sure you do this. It’s the best way to approach things, because as soon as you take out one zombie, you can focus on the next one and then the next one and so on.

This way you will have less enemies to worry about, so make sure you do this. It’s the best way to go about it, instead of just putting on some damage on the enemies and leaving them walking.

This is probably one of the most important things of them all. I suggest that as soon as you are facing any number of zombies, you start by locating where they are usually moving their heads to (as I mentioned in the first point, where you should try to check their move patterns and try to predict them).

I suggest that you always try to shoot the head first because that will deal the most damage, and possibly take them down in one single blow. Whenever you are landing a shot in the head, you will see the text “Headshot” appear on your screen.

If that happens, it means that your shot did a ton of damage and took the zombie down pretty quickly! Try doing that, because it is the most efficient way to kill them.

Whenever you are going into a new area, you will see that you have multiple points, each signifying one mission (you will see them all on the right side of the screen, under the scene’s location).

I suggest that you go over all the 10 missions for each region, because that way you will have a much easier time opening the Supply Crates (we will cover these down below). The Missions are easy tasks, and they are covering basically you taking down the zombies that you run into.

Watch an ad to double your Mission Rewards

After completing each mission, if you are waiting on the post-game screen for a couple of seconds, then you will get an extra option which will let you get 50% more rewards from them!

I suggest that you always claim the extra rewards from the missions, because they are pretty useful if you want to level up, upgrade your weapons and get some extra stuff! All you have to do after completing each mission is watching a short advertisement which will give you an extra 50% rewards.

If you want to quickly make upgrades and get rewards, then I definitely think that if you don’t mind watching the ads, then do it!

Basically every 3 missions completed, you will be able to open up one of the crates (of your choice) and claim the reward inside. One of the main objectives of completing the missions should definitely be this, because you can claim a ton of useful rewards from them.

From these chests, I always like going for the Green Supply Crate. Now it’s just a personal preference, but you can choose either one of them. Maybe even try them all out and see what you get!

Buy new weapons and get stronger

You should always try to improve and get stronger, ideally to try and one shot the zombies. Now of course, this is not going to happen very soon, but as soon as you can afford a new and better weapon, you should try going for it.

There are various types of weapons in the game, from crossbows, to guns and so on. You can choose to buy one early on, but in my opinion you should save some cash to buy better weapons later on, while early on you should focus on upgrading and mastering the weapons that you have. This will take me to a little tip, which might help you, especially early on:

When you are starting off in the game, you will have the Pistol, then move on to the Crossbow. I suggest that you start by mastering each weapon, especially these ones, so that you won’t have to spend a lot of money in the early game to buy new ones, and rather save them for the later, more powerful weapons.

Once you master these weapons (with a couple upgrades) you will deal much easier with any situation. It’s better to know how they work in my opinion, because if you manage to save some cash, you will benefit from them better later on.

I suggest that you always try to upgrade your weapons in the game, so that you will not only deal more damage, but also have better aim and so on. Basically you can improve (or upgrade) the following features for your weapon:

– Damage: improves the amount of damage your weapon inflicts on the zombies.

– Accuracy: this will make your hits land much smoother, and the chance of missing the shot will decrease.

– Reload Speed: the speed with which you reload your weapon – it’s critical especially if you are wielding a weapon which requires constant reloading.

– Total Ammo: the total amount of ammo your weapons have – you can shoot more, having more chances to take down the zombies sooner.

Eventually you should work on upgrading all of them, because they all will be super useful to you, so make sure that you start making the upgrades when you have enough funds.

There are a few upgrades which you should focus on at start, because they will make a difference. I suggest that you start by upgrading the weapons which you use the most first, and then move on to the next ones.

Also, when you are making the upgrades, depending on which type of weapon you are upgrading, you can choose the following:

– First upgrade the Attack and Accuracy, then the Total Ammo and Reload Speed for weapons such as the Pistol.

– For weapons such as the Crossbow, you will first need Reload Speed, because it will rely on you reloading after each shot, so that’s why it is very important. After that, focus on Accuracy, Attack and finally on Total Ammo.

In my opinion the Accuracy is one of the most important upgrades no matter what weapon you are using, because if you have good Accuracy, you will land more often and use less ammo overall to take the zombies down.

There are also the General Challenges, which are a little bit more difficult to complete, but are just as rewarding. Make sure you do the Daily Challenges every day if you want to level up quickly and unlock better weapons!

These would be all of our Dead Zed tips and tricks that we have for you right now! Do you know some more useful game tips to take out on the zombies? Leave them down in the comments section below!