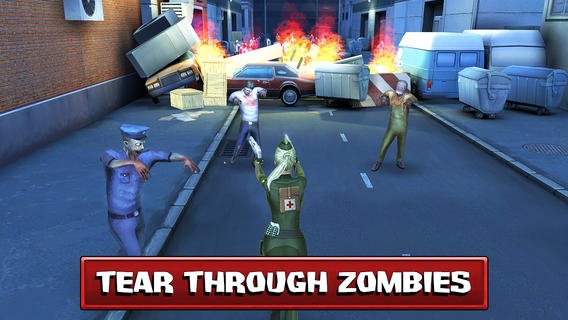 Dead Route is an on-rails shooter that will intrigue fans of simpler arcade games combined with something along the lines of Tomb Raider with a female lead wearing something very similar. The title was published by Glu Mobile, and developed by 2 Zombie Games. The experience is a lot of fun, and benefits greatly from the handheld pick-up-and-play sessions on the train or in the car. The on-rails settings really simplify the controls for the gamer, and make the experience endlessly enjoyable in the long term. Dead Route is best played with the following tips and tricks that will help gamers get the most out of their gaming experiences.

Here are a few quick tips and tricks for Dead Route that will help you kill that last zombie, avoid that pesky obstacle, or even stop running out of ammo at those crucial moments.

1. Obstacles should be avoided at all costs!

Moving out of the way of these pesky one-hit kills is essential to your enjoyment in the overall game. Keeping an eye on the terrain that is instantly ahead of you is virtually a must for really enjoying the game to the full experience. Really pay attention to how Dead Route functions in the beginning of the tutorial or you could get seriously lost. This is essential to finding a gameplay experience that is less frustrating in the long run.

2. Keep your eyes on the stamina bar

The stamina bar only lets players go through a certain number of levels at a time. Like most games that function in the same way, there is a sharing feature that allows gamers to invite more friends to the table in rode to really get moving with some of the different people that you’re working with towards a common goal. The first time that you refill the stamina bar, the game will let you do it for free; but past that initial point, prepare to start paying for some of the other lives.

When zombies come up anywhere on the screen amok, be sure to take advantage of the auto aim feature that lets gamers lock onto targets with ease. Don’t worry about how accurate your signer is at any given time regarding the larger gameplay, simply focus on  exactly what you’re doing and the strategy of what is coming up next in order to think about staying alive longer. This is an expert tip that is going to guide you along easier, and avoid many of the instant death scenarios that can pose a vital threat to your heroine.

There are many different guns and other pieces of loot to check out almost immediately after you start the experience, but keeping track of some of the other core functionalities of the game is another really important way to use some of the other weapons that you are going to utilize along your journey. Bigger clip sizes and high damage counts can help you take out zombies in the easiest, most effective manner. This is going to be something that is very important to continue doing well in the long run in order to get past some of these harder zombie encounters.

5. Keep away from those zombies!

When the zombies grab you, it can mean certain death for almost every scenario. This is a really dangerous way to play the game and one of the more frustrating instances. Instead, gamers will want to steer of the obstacle, like there are another set of really nasty zombies standing in your way. This will help you enjoy the title further in the long term, and keep you coming back for more zombie slaying action without some of the frustration of losing the stamina bar points and starting the title all over again.

6. Reload whenever zombies are not near you

This is another instance which can mean the difference between life and death. The game skillfully finds some of the middle ground between what you are trying to do and layers of strategy and chase amidst some of the other challenges you are trying to deal with in the game. Reloading is the bridge between slaying that one zombie and simply becoming the Ext email. If there is no zombie currently killing you on your path to greatness, make sure to reload and stay out of the way!

The item boxes can have many of the power ups that you will personally need like some coveted health, or even some of those clip sizes that will end up being massively beneficial towards your end goal in the long run on those missions set to the hard difficulty. Some of those final moments in the game are tough, but using an item box that is completely fresh off to the side of the road will be a nice reward.

The bonus missions are a really important piece of the game that can help you get that new gun even faster than you could have ever possibly imagined. You’re only go get a few shots at the bonus mission at each level due to the limited amount of energy that you can buy at every given location. The trick is to be smart about which path you take. You are currently embarking on and making sure there is ample amount of room and ammo escape and be happy from. These missions will be a hindrance at first, but once you start getting stronger guns and power-ups, they will be much more useful to you.

If you want to check out some early Dead Route gameplay, you can do so below:

And these are our Dead Route cheats and tips, if you have others to share, let us know by commenting below!