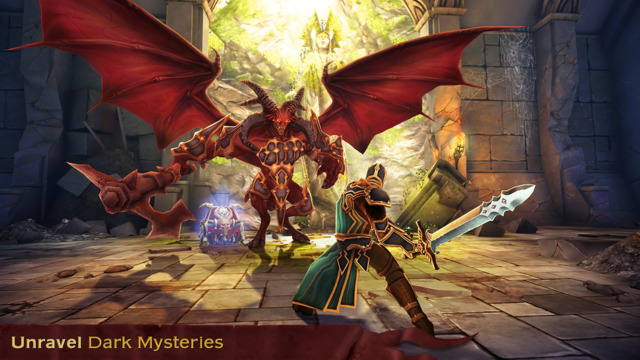 Enter the world of Mourngard. In this epic action RPG, you and your brother are the catalysts to the demon take over. But was your arrival a blessing in disguise? Dawnbringer is an amazing open-world adventure. It is heavily influenced by Epic Games’ Infinity Blade, if you have ever played that. Timed attacks and parries are key to winning this game’s precision-based duels. We’ll help you defeat the demons before you and figure the mystery behind the cataclysmic events with our Dawnbringer cheats, tips and tricks strategy guide!

Attacking in the same direction as your opponent’s swing is about to connect will result in a parry, throwing your opponent off guard momentarily. This is the best time to launch a counter attack as they will still be recovering. If you get the timing just right, you’ll see “Perfect Parry!” appear on the screen. Enemies will be staggered for a slightly longer time than usual, so landing perfect parries are vital to landing big hits on your enemies.

The first thing you should do when you encounter a new enemy type is to take it slow try to read their moves. Each type of enemy has unique attack animations, and you’re going to get hit a couple times trying to memorize and recognize them! So, the best way to handle meeting a new enemy is to not attack right away. Let them attack a couple times so you can get a feel on their animations.

Once you’ve mastered both tips above, you can start slashing your way to victory. Unlike Infinity Blade, enemies are never sent into a stunned state after a certain amount of parries. The most efficient way to defeat your opponent is to attack as much as you can while parrying when they retaliate. Once the rhythm of combat clicks with you, you’ll be able to attack nonstop while parrying each attack sent your way. Remember that you need near-perfect timing to do this right, so don’t be afraid to stop attacking and give yourself enough time to prepare for a parry if you have to.

When you’re wandering through the land of Mourngard, sometimes you’ll come across glowing blue barrels. If you tap on them you’ll break them. Be sure to break them as you see them, because some of them contain black iron ash inside, a crucial ingredient for upgrading your gear. Sometimes you’ll even find green barrels – breaking these will restore your health a little bit. Useful for keeping up the fight!

Once you collect the required amount of black iron ash, you can upgrade your gear. Upgrade increases the piece of gear’s respective stats, so you should always upgrade whenever you get the chance. It’s best to start upgrades if you’re going to stop playing for a while, as they are not instant upgrades and need some time to finish before they’re upgraded.

Arena quests are unlocked after you complete the tutorial. In the arena, you’ll take on a random opponent. If you’re victorious, you’ll earn a reward based on how many arena matches you’ve won. The arena monster resets after a couple of hours, so be sure to check back soon to see what you can fight next.

That’s all for Dawnbringer. If you have any other demon slaying tips or tricks to share, leave a comment below!