In today’s article we are going to cover the classes in Dawn of Isles, and tell you everything you need to know in order to select the best starting class depending on how experienced you are at the game.

If you haven’t done so yet, make sure you check out our game guide to learn all of the game basics and learn how to get better at the game, from the earliest stages! So, are you ready to learn all about the classes in game? Then let’s not waste another second and dive right into our Dawn of Isles classes guide!

The Fighter is basically the tank of the team. They rely on high defenses and attack, and but they are also quite difficult to control. They are the most defensive class in game, and they can act as the tank in any situation.

They are not extremely easy to play, so I definitely don’t recommend them as a starting class. Their weapons can be either an axe or a sword, so depending on how you choose to play (more towards damage or more towards tanking), choose a weapon mastery to fit your play style.

The Ranger is a class which focuses on damage from a distance, and on keeping the enemies under control. They are quick to fight, but not that keen on taking damage because they don’t really excel at defense.

The Ranger is a swift killer, which relies upon long ranged attacks and basically staying away from the enemy attacks. They are not super easy to play, and their kit provides a ton of crowd control, which makes them a super important asset when fighting enemies within a group.

They have very high damage, and when you combine that with the crowd control abilities and low defense, it makes the Ranger a pretty difficult class to play – therefore, I don’t recommend it as a starting class unless you are an experienced gamer.

The Dancer is one of the most beautiful and quite interesting classes to play in game. They are easy to control, and also have a very fun kit, not lacking at all on the damage side. They are also masters in regenerating, so they can be pretty good and super useful for any kind of team, no matter if they want a healer or a damage dealer.

Given their overall balanced stats, the Dancer is a really good class for both beginner and more experienced players, but in order to master the Dancer, you will need to play it for quite a bit.

A good healer is a major asset in any team, so if you are heavily focused on the healing part (regen) and less on the damage part, you are going to be one of the most valuable players on the team, able to keep the rest of your friends alive and well – while also having a good damage input.

I definitely suggest the Dancer as a starting class, because their way of fighting and their beautiful skills make for a really nice addition, as well as an easy class overall.

This is yet another class which is super beginner friendly, and extremely powerful in terms of damage. They also don’t lack in the defensive side, and the crowd control abilities they got make the Warmages a pretty powerful, yet still beginner friendly class.

The Warmage players are extremely powerful and overall a force to be reckoned with. They have powerful crowd control abilities, which combined with their high damage, make for a strong class.

They are not difficult to handle, but not easy to master either. This class is a good addition to any kind of team and will synergize well with anything, especially with the Dancer if they provide some healing.

Since their defense isn’t that low, they can take a hit or two, but don’t rely on their tanking ability because it’s nowhere near close to the Fighter’s. I definitely suggest them as a starter class!

These would be all the Dawn of Isles classes currently in game! Which one is your favorite and why? Let us know down in the comments section below! Also, don’t forget that once you’ve chosen a class, you can head on to the “Edit Appearance” button in the bottom right of the screen to make that character exactly to your liking! 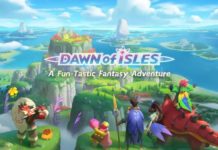 Dawn of Isles Cheats: Tips & Guide to Get More Powerful