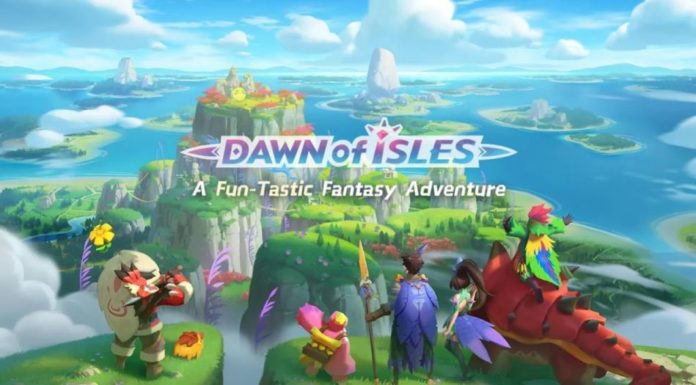 In today’s article we are going to share with you all of our Dawn of Isles tips and cheats to help you get stronger and learn everything there is to know about the game to become better!

If you are looking for a beautiful game to spend your time in, as well as keep you entertained with pretty graphics and plenty of stuff to keep you busy in game, then you will find Dawn of Isles more than enough to satisfy all of your needs and also brighten your day, because let’s be honest – it’s a pretty fun game!

So, are you ready to learn all of our Dawn of Isles tips and tricks? Then let’s not waste another second and dive right into them!

Start by picking a class that’s right for you

– Dancer (specialized in healing and damage)

– Ranger (specialized in damage and crowd control, but a little difficult to master)

– Fighter (specialized in damage and defense, but again – also a little difficult to master)

For your very first character I suggest either Warmage or Dancer because these are, in my opinion, the easiest to play and progress with. After you get a better understanding of the game, you can go and make a new character of a different class, but for now I really suggest you pick one of these two.

In the game you won’t have all of the features unlocked when you start right away, so I suggest that you take your time and follow the quest line. Maybe, if you are patient, even read the dialogues because they are pretty interesting and will give you an insight on how adorable and amazing this game actually is!

You will receive Coins and tons of EXP from following the quest line, but you will also learn about the interesting game combat system and crafting.

You will have to quest for quite a bit before you unlock the end game features, because it takes some time going through all the cinematics and dialogues. When you can’t progress in the main quest line anymore because of a level requirement, then start doing side quests.

Since the game progression is pretty slow, you will have to spend quite a lot of time in game to do the quests, so don’t expect to start one day and be max level the next one, because it’s a lot (A LOT) tougher than that!

Unless you are playing for hours on end, you will need to grind quite a lot to unlock everything, just like you would in a typical PC MMORPG.

Maybe you won’t see this as such a threat in the early game, but later on you should definitely avoid them because the damage can be indeed fatal. These red carpets symbolize where the monsters are about to hit, and the ones around the monsters show their attack range.

You can avoid these by tapping on the dash button on the interface (the one above the attack button) and you can use it during fighting. Always try to dodge the attacks which have a “charging” animation – the ones where the red area slowly charges up.

Pay attention to your tools’ durability

You will need the tools for gathering, mining, chopping down wood and other such tasks which require some labor. I suggest that if you are on a quest to gather tons of resources, then you carry a spare tool in your bag because the durability on the first one might break it down (if you use it a lot).

You can craft extra tools on your island, by going to the crafting bench. There, you will need a couple of resources to craft them, so make sure you carry an extra bit of resources with you – just in case.

Construct and upgrade your buildings

On your island you will have several buildings that you can use to produce stuff for you and decorate the island. So consider it both aesthetic and functional. You should definitely start gathering all the necessary tools and items required to make upgrades, because they will be very useful.

First things first: you need to focus on upgrading your Deity Altar. This will unlock new buildings and will let you get new features on your island. You can upgrade it by gathering Breezewood and Sand Rocks, so make sure you do so!

I suggest gathering tons of resources and also start upgrading your buildings once you unlocked them. You can do this by gathering stuff on or off your island, then heading back and checking for the upgrade requirements of each building by pressing on the top right button with the building name on it.

As soon as you upgrade the Deity Altar to level 4, you will unlock the Kitchen and the Crafter’s Hut, which will allow you to produce a ton of useful in game stuff! This should be a big priority!

If your slots do not allow you to have both at the same time, it means that you will need to further upgrade the Deity Altar to unlock more slots. If that’s the case, then always build the Crafter’s Hut first!

When you need to level up fast, complete extra quests

When you will need to level up but pretty much ran out of main quests (or they won’t let you advance further) you can go to your island and complete the task board quests.

Another way to get experience, is by checking the towns in the world map and look for the yellow exclamation marks. These will give you a few extra side quests, so if you don’t really know what to do in game anymore to level up, these will provide a few quests.

Also, don’t forget that you gain experience by gathering and fighting monsters, so if you really want to shoot two birds with one stone, then you can gather materials (to make upgrades) while also getting tons of experience.

You can control the elements

Well, more or less – you can have them in a flask, at least!

When you are fighting in Dawn of Isles, you can combine your abilities with various elements to produce new deadly skills and stuff! These will come in handy when fighting world bosses and huge and important battles, but you need to learn how to do it properly!

You can craft flasks with a certain element by heading to the Home Island -> Crafting Bench -> Ele. Flask and there you can select which one (or ones) you want to craft. They each require certain materials, but you can go gathering whenever you want to fight using certain elements.

In game there are quite a lot of rewards you can collect, and I am going to tell you where you can claim them! First things first, you should collect your rewards in the in game mail which you received when you first made your character!

Secondly, head on to the Menu -> Benefits tab and there you can select from a list several types of rewards. There is a reward which you can claim daily for simply logging in to the day, and that changes depending on the day. If you like something there, make sure you log and claim it the day it appears on!

The Level Up Rewards can be claimed every 10 levels, and they will give you various goodies, so check these out too!

The Tribes are basically the equivalent of a guild in this game. You can play with other players and help each other in dungeons and whatnot. There will be plenty of tribes looking for active players like you, so if you want to find one, you can leave a comment down here! Also, if you own a tribe that is currently recruiting, you can leave your tribe name down here below!

Level up your skills and gear up!

You will get your most basic gears from questing and taking part in the dungeons early on, and that should suffice for now. Don’t spend too much time on the gear at start, because you will level up relatively quick. (just make sure you have the best gear equipped at all times, whenever you get new ones)

Instead, you should focus on upgrading your skills. The skills will be costly, but they will give you a ton of power and that’s going to be pretty helpful when you fight. Always level up the skills whenever you can, and don’t neglect them because you will see a big difference.

Level up only one of the weapons at the beginning, because if you do that you’ll run out of coins in no time. So focus on one type of weapon set skills for now!

Whenever there are in game events, they are usually time limited, so make sure you complete them before the timer runs out because you will not regret it!

These would be all of our Dawn of Isles tips and tricks that we have for you right now! Do you know some more useful game tips that you would like to share with us? Leave them in the comments down below!

Dawn of Isles Cheats: Tips & Guide to Get More Powerful