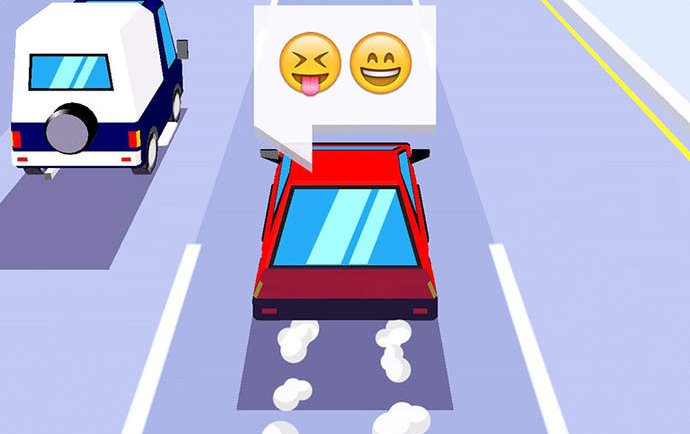 Dashy Crashy is a rally addictive and interesting endless runner/driving game that challenges us to go as far as possible on a crowded highway and unlock 54 cars while doing so, with them ranked based on our performance in the game. It’s extremely simple in concept – you only have to use one finger in order to play the game – but very difficult to master, and I am here to share with you some Dashy Crashy cheats and tips to unlock all cars and get the most out of the game!

Your personal skill will matter a lot here, but there are some things to consider and we’ll talk about them below. So let’s not waste a single second and instead let’s check out some Dashy Crashy tips and tricks!

1. Use cars that resist more than one hit
Most of the cars in the game result in a game over if you hit an obstacle, but there are some that can take a beating. Try them all and see which of the cars that you can drive can take more than one hit, because that increases your chances of actually getting as far as possible by a lot. Look for the large vehicles like the Lorry Cab, Lorry, Garbage Truck, Fire Truck and so on when you want to get as far as possible. For fun, play with the vehicle that you like the most!

2. Don’t be afraid to use the brakes!
You can swipe up to go faster and you should when you have a clear path ahead in order to get as far as possible, but the brakes are also extremely important for your race. I usually consider braking whenever vehicles are coming from behind (when one of the lines on the highway gets colored) and let them pass, then try to avoid as good as I can the mess they leave behind. I tried the other way (speeding up past them) and braking is the better option!

3. Always look ahead
The secret of getting as far as possible is to always look at what the game’s throwing at you. Try to look as close to the horizon as possible and decide which route is best to take – the one that has he least traffic, of course. But you also have to consider the vehicles that are changing lanes – their lights will indicate if they go left or right. However, they are usually slow to change lanes and you can easily speed past them before they make a move, if you have enough space to play with.

4. Try to stay on a side of the road
Usually, when we’re talking about endless runner type of games, it’s wise to just stick to the middle in order to make it easier for you to switch left or right. That’s not the case with Dashy Crashy, where I found out it’s usually a lot easier to simply avoid traffic by sticking to either the leftmost or rightmost sides of the road. Have this in mind and try to move from the left to the right whenever possible, but always adjust your style based on what’s coming ahead!

5. How to unlock all cars
You can easily purchase them if you have some money to spend (tips: start with the rares ones, because they are the best – like the Tank which can take quite a beating!) If you don’t want to spend real life money on unlocking more cars in Dashy Crashy, all you have to do is play, practice and get better & better. The better cars are rewarded randomly when your score is really high, so it’s up for you to get better, improve your performance and eventually you will unlock all cars in the game!

Do you have other tips and tricks to share with fellow Dashy Crashy players? Let us know by leaving a comment below.