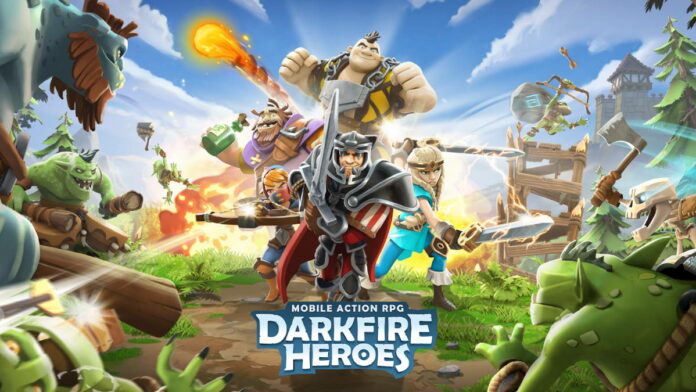 Darkfire Heroes is the newest game from popular mobile game developer Rovio Entertainment. Darkfire Heroes is a tactical real-time RPG where you command a squad of fantasy heroes that wield elemental spells and powers. Players can utilize hero skills and spells to level the battlefield in their favor, and mastery of doing so is the key to victory! We’ve got lots of tips for you in our Darkfire Heroes cheats, tips, and tricks strategy guide!

Darkfire Heroes features a standard questing system that allows you to complete certain feats to get rewards. There are two sets: daily and weekly quests. Completing all daily quests nets you 150 gold, a few gems, and a freebie chest. Try to do complete all dailies to get a bit of gold – you’ll need a lot in the long run.

The weekly quests require a bit more time to complete, but like the name suggests you have the whole week to do it. You get 600 gold, more gems, and a golden chest for your efforts. These quests should be done as much as possible, because you’re going to need a lot of gold for upgrading your heroes.

There are four hero roles in Darkfire Heroes: tanks, damage dealers, supporters, and healers. Building a balanced team is the key to victory in this game, as teams that work well together will be the most successful. Stacking one or two roles is usually not a good idea, unless you’re gunning for a specific strategy.

Tanks are your frontline warriors that lead the charge into battle. With high health, defense (physical defense), and protection (magical defense), tanks are designed to soak up hits for your more fragile heroes in the back. Tanks usually have some sort of skill that helps them mitigate damage so that they can stay in the thick of things.

Damage dealers are self-explanatory: these guys focus on bringing the pain! They can either be melee or ranged, and they specialize in taking down enemies quickly with powerful skills. They tend to have high damage and crit damage, but also low health and defense.

Healers are heroes that are used solely for healing the wounds of their allies. Healer heroes have powerful healing skills that can usually heal the whole party over time or immediately heal a single hero for a large amount of health. Healers have low health and defense but high protection, giving them some survivability against magical attacks.

Supporters are auxiliary heroes that focus on weakening enemies. They usually have skills that hinder enemies in some way, whether that’s draining their health, slowing their movement down to a crawl, or breaking their defenses.

There’s no best combination of roles, so you’ll have to experiment with your heroes and see what works best for you. A good starting point is to have one of each role and then the last slot is whatever you choose.

As for which spells to bring with you, that’s entirely up to you. Each spell has its own designated use, and you’ll need to build a deck of spell cards that compliments your team’s fighting style.

Mana recharges on its own during a level and each card requires a certain amount of mana to cast. You can hold up to ten mana at a time, and if your heroes are getting by fine at the moment, it may be a good idea to stockpile that mana. In case of emergency, you can blow through all of that mana using all of your spell cards in rapid succession.

Don’t use Auto Right Away

You may be tempted to treat this game like a typical autobattler gacha game, but Darkfire Heroes gets pretty difficult as you progress through the main campaign. You’ll want to play manually and time your own spells and skills, because your success is heavily reliant upon well-timed tactics.

Play through a level manually if you’re going through it for the first time. Unless you’re massively over leveled which shouldn’t happen, then you’ll have a much better chance with manually cast skills and spells. The best time to use auto is when you’re much stronger than the enemies you’re facing, or you’re farming up materials.

Expeditions are mini adventures accessed from the main menu. Each expedition takes a certain amount of time to complete, which rewards you with treasure chests. Expeditions are pretty low maintenance – just make sure to log into the game, start up an expedition, and then come back in a few hours. That’s it!

Expeditions are basically easy gold, cards, and upgrade materials, so it’s important to always keep one running, especially if you’re away from the game for a long period of time.

Every time you open a treasure chest, you’ll receive random hero cards. You’ll discover new heroes occasionally, but most of the time you’ll receive duplicate cards of heroes you already own. You can use these dupes to upgrade your heroes, improving their attributes.

Early on, you might be a little reserved because you don’t know which heroes are good, but don’t worry too much about this. Go ahead and experiment – level up whoever you like. As long as heroes are still low level, their upgrade costs don’t require too much gold.

As a general starting point, it’s good to have heroes of different roles and elements. Certain levels grant a level boost to heroes of a specific element. For example, the second area in the campaign – The Bandit Trail – add six levels to any water element heroes used. In order to take advantage of these boosts, you’ll need to have heroes from all different elements.

Delve into the Elemental Dungeons

Once you’ve established a solid line-up and progressed a bit into the main campaign, it’s time to venture into the elemental dungeons. The elemental dungeon is a constantly shifting dungeon that is the main place to gather elemental essences, material that is required to unlock new hero skills.

There is essence for each of the six elements. The dungeon’s current element depends on the day.

The lower floors of the elemental dungeon hold more essence, so it’s your goal to get as far as you can with your team to farm up some essence. Elemental superiority applies here, so make sure to bring heroes that match the dungeon’s daily element.

Unlocking new hero skills is the way to let your heroes truly shine, so you’ll need to get a lot of essence. If the enemies are getting too strong, you can also replay earlier floors but just keep in mind it’s not as efficient as clearing new floors in terms of farming essence.

Once your team is strong enough to reliably clear the deeper floors, you should spend all of your energy doing elemental dungeons. Unlocking skills is so important for your heroes that you’re going to need a LOT of essence. Once Sunday rolls around, you can continue working on the main campaign.

After you’ve progressed through the main campaign and unlocked a couple of chests, you’ll start to pile on the heroes. At this point you’ll probably have around 20 or so heroes, so it’s time to start thinking about your main team.

This game has around 80 or so heroes, so upgrading all of them whenever you get enough cards is not viable, as you will quickly burn through all of your gold. Like we mentioned before, if the hero is low level then it’s still pretty cheap to level them up, so use this time to experiment and see which heroes you like the most.

Your goal after the early game phase is to settle on a good team that can hold up against any challenge. Choose a select few heroes that you really like, then invest gold and essence into them to get their levels and skills upgraded. You will eventually be able to upgrade a majority of your heroes, but that won’t be for some time.

Common heroes are, well, the most common kind of hero you’ll see. These heroes cap out at level 25, and they’re easy to max out.

Rare heroes are a little harder to max out, as you need the higher rarity chests to get their cards. Make sure that you’re doing the campaign and quests to get as many chests as possible, and don’t forget to get enough trophies from the arena as well.

Epic heroes are the hardest to level up. You’ll need to acquire them from limited time events, so make sure to log into the game at least once a day. Eventually you’ll have to buy the legendary chests or, unfortunately, the paid premium packs.

That wraps up our guide on Darkfire Heroes. If you have any other tips or tricks to share, let us know in the comments below! 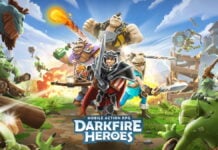 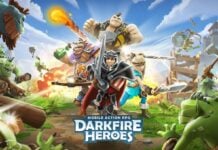