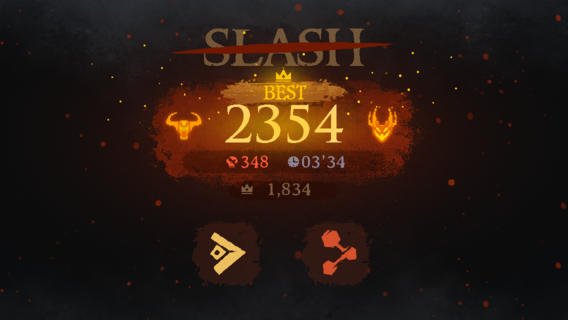 Dark Slash is a very interesting and addicting game for the iPhone and iPad created for ninja wannabees to test out their skills against endless waves of zombies. Since that’s not an easy job to do, we have decided to come and share with you some Dark Slash cheats: actually a set of tips and tricks that will help you go as far as possible and crush the high scores of your friends and, why not, rule the leaderboards!

So read on for our Dark Slash cheats and tips for this great iPhone and iPad game!

1. Don’t move!
Swiping the finger on the screen has your character move, but that’s just a waste of time. Instead, keep tapping for him to attack and you’ll do just fine, even if it’s just for moving: whenever you tap, no matter if there are enemies where you tap, the character will move. Faster than swiping. So never use that!

2. Is the Skeleton King a joke?
Certainly not, but clearly difficult to get to. When you get to it, though, focus all your attacks and strength to defeat that boss because you will receive one free life… forever! Which is an amazing deal because, as you probably know, you can lose one life extremely easy.

3. You can actually avoid shots
Although the on-screen chaos is at pretty high levels, if you can focus and see how the enemies attack, you can avoid their shots. This is especially useful for long range troops whose attacks can be avoided, then you can flank them and take them out easily.

5. Carefully spend the Save Me’s
You can go for a “Save me” for free for three times, then you have to pay 99 cents for a new pack of three. So put them to good use and make sure you use them only when you manage to go very far in the game. Otherwise, it would be just a waste of money. But the good thing is that you can use all three save me’s in one game, so they can really be used to get really far in the game!

6. Practice, practice, practice
It’s very important to keep practicing. There’s a bit of luck involved with winning Dark Slash, so some games might go way worse than the others. But each time you play a new game, you get better so make sure you keep doing this until you’re a real pro.

Do you have any other Dark Slash tips and cheats to share with fellow players? Let us know by commenting below!