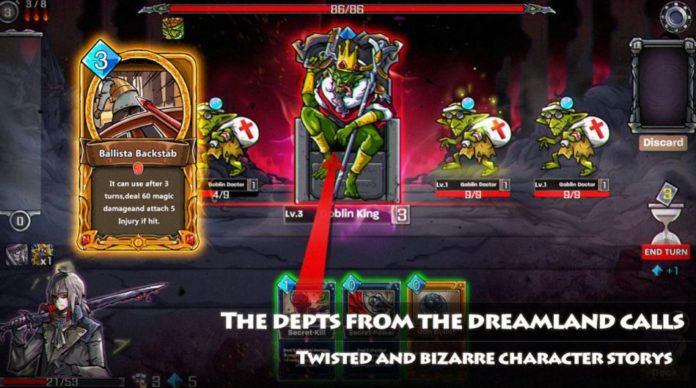 In today’s article we are going to cover all of the Dark Dungeon Survival – Lophis Fate Card Rougelike tips and cheats so that you can defeat all the enemies that show up your way and deal with them easily.

This game combines card battles with dungeon encounters which will transport you into a world where you can explore each character’s story in a very… unique way. You can have a pretty tough encounter with the last boss overall, or a very smooth one if you are taking into consideration what we are mentioning here!

In the game you will be able to explore various options, since you will have free choice to go wherever you want. The game basically lets you choose your path where you want to go, and it can be either a monster, a random reward (buff or coins) or a kind of shop.

Since you can choose any path you want, I suggest that you explore as much as you can, because you never know what you might run into. In my opinion it is super good to go explore all of the options, because no matter the encounter you will get a reward which will help you in the long run either way.

Take on the enemies one by one

This tip should be respected no matter what, because the more you progress into the game, the more damage the monsters will do, and that means that you need to take them out one by one immediately.

So basically the way to go about this is by never trying to kill multiple enemies, and leave them with 1-2 HP, and rather take them one by one. Focus on one enemy at a time, and make sure you finish them off if possible, because if you leave them alive, they will do damage to you.

Make sure you always focus on the monsters with lower HP first, because those should be the ones which will go down the fastest. If you always do this, you will have a much easier time surviving for longer, because once you kill an enemy they cannot deal damage to you (pretty obvious, right?).

If you leave them with even 1 HP, then they can still damage you and if you are pretty unlucky, they can even deal quite a lot of damage too. You should always be looking to take out as many enemies (and I mean take them out completely, not leave them with 1 HP) before you end your turn as possible.

This tip can go hand in hand with my previous point, because it’s never a smart idea to waste the cards. Let’s say for example that you have a car which deals 9 damage. Do not waste that on an enemy with 3 HP, because it’s really not worth it. Instead, you can use it on an enemy which has 9 HP and instantly kill them!

Another thing is that you should always save your cards such as Secret Power and Secret Kill for last, because their bonus will be wasted if you play them at the beginning of your turn.

You should be very careful when picking what cards to play and in which order, because it can be a real game changer (quite literally). Pay close attention to their description because it’s not worth wasting the cards just for the sake of using them.

Refill your HP before ending a battle

All throughout the stages, you will have a health bar in the top left corner of your screen. This health bar will be consistent all through the game, so if you take some damage in stage 1, if you don’t recover it in the meantime, you might end up the final stage with such low HP that you will die instantly to the boss.

I suggest that if you have a card that heals available when you are about to finish a fight, then you should use it to restore any HP that you can. This will help you maintain a healthy HP bar, which will make the game much easier to handle once you reach the final stage.

If you have First Aid card, then use it from the very first fight (if you took damage, of course, else there is no need to use any HP recovery card), because if your health bar drops too low, it will get harder and harder to recover in a short amount of time.

When you finish certain encounters you will be asked to choose one of the cards given. Some of the options will be cards, others will be HP upgrades, and others will be card upgrades. I suggest that firstly you should focus on getting as many HP upgrades as you can, since that is going to help you the most.

Of course, if you are offered a good card, it might be worth passing on the HP upgrade in favor of that, but you should read it carefully and make sure it fits well in your deck.

High damage, high reward – or not?

I thought that it would be just right to cover this in a separate paragraph. Basically you might have noticed that there are some cards which do huge amount of damage to all the enemies, but also including yourself.

These cards, such as “Doom” are very powerful at first glance, but when you are thinking about them in the long term, it might not be super good to use them randomly just because you are dealing with a lot of enemies at once.

Let’s take Doom for example – if you are using it during the normal battles where you are facing 3 or even 4 enemies, they will instantly die, but they will leave you with 40 HP less. It might not be such a good idea, especially if you still have a final stage boss to fight.

Upgrade the most important cards first

You can upgrade the cards whenever you are given the option to choose so (if you don’t want to upgrade your MAX HP or pick another card), and if you really don’t know which card to pick, then let me help you a little bit: Secret Kill.

This card I found to be super useful, especially at level 2 (2 stars), where you will deal 10 damage and the card will still return to you once enemy is killed. I upgraded this card and it helped me quite a lot, so if you can, I definitely suggest that you give it a shot too.

This is something that not many people pay a lot of attention to, especially if they are not avid card game players. Basically some cards will have 0 Energy cost (it shows on each card the cost in the top left corner of the card, on blue background) while others have more.

If you do not have the required Energy cost, then you are not able to use that particular card until you gathered enough Energy. Energy is restored after each turn ends, so you will receive some continuously, but if you want to play multiple cards which have 1+ Energy Cost then you might not be able to do that in a single run, unless you are playing the Assassin and have multiple “Recovery” cards (the cards which instantly give you 2 Energy).

I suggest that if you are trying to play multiple cards like this, that you think in advance how you want to do it – either you wait a few turns to save up Energy or you use another approach.

Visit the houses and fountains

The houses and fountains can give you various bonuses – in the houses you can often find cards or other useful stuff, and in the fountains you can often heal. I suggest that you don’t miss out or pass on visiting them, because you will not find often monsters there.

Sometimes when you visit houses you will be offered to watch an advertisement in order to claim the reward. If you see such an option, go for it because it is definitely going to be worth it. I suggest that also if you are next to a fountain, go there and even if there are monsters guarding it, defeat them and claim what ever it is in the fountain.

In the game there are quite a few cards which you might find meh, but some others which are so good that if you get a few of them, then you can form quite a powerful deck! Let’s take a look at the cards which I found to be most useful:

– Secret Kill (I mentioned above why I love it so much)

– Crossfire (the more enemies you’re facing, the more damage it does)

– Stone Shield (gives you a ton of shield)

– Shield Attack (attacks and gives you a shield)

Of course, there are a ton more useful and nice cards (such as Vince’s Case for example), but here I have stated a few of the ones which I found reasonable in terms of rarity, but also really useful.

Try out other characters

We know that there are multiple characters each sporting their own story, but if you don’t have the Souls necessary to unlock them, then you can try playing a “trial” with them, by watching an advertisement to unlock the character for a limited period!

You can do this to try them out and see which one you like the most, because it might turn out that even if Assassin is the “most expensive” character, she might not be to your liking and instead you will end up playing only with the Swordsman!

These would be all of our Dark Dungeon Survival – Lophis Fate Card Rougelike game tips and tricks. Do you know more strategies or simply want to share more tips about the game? Leave them down in the comments section below!