Om Nom and Om Nelle are back, and this time they are running through the vistas of Nomville! There are bad guys on the loose, and it is time to clean up the streets in Om Nom: Run, the premiere endless runner to the Cut the Rope universe.

As Cut the Rope became more and more popular, ZeptoLab branched out to different genres. The first spin-off was Om Nom: Merge, which was a merging focused game. Now, ZeptoLab is tackling the endless runner genre with Om Nom: Run.

Players will take on the role of either Om Nom or Om Nelle as they run through the streets of Nomville. Collect coins, dodge obstacles, and explore lots of different locales as you race to see how far you can get.

There are also plenty of power ups for you to collect that will help you on your quest. Om Nom and Om Nelle are able to perform awesome stunts with the help of specific ramps, and there are plenty of temporary power ups to help you earn lots of points and complete missions like magnets, jumping boots, and more!

Om Nom and Om Nelle are not alone! There are plenty of different heroes from the Cut the Rope universe that can be unlocked as you progress through the game. Get them all! 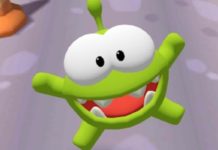