Home Game Guides Cuphead DLC: How to Unlock ‘A Horrible Night to Have a Curse’... 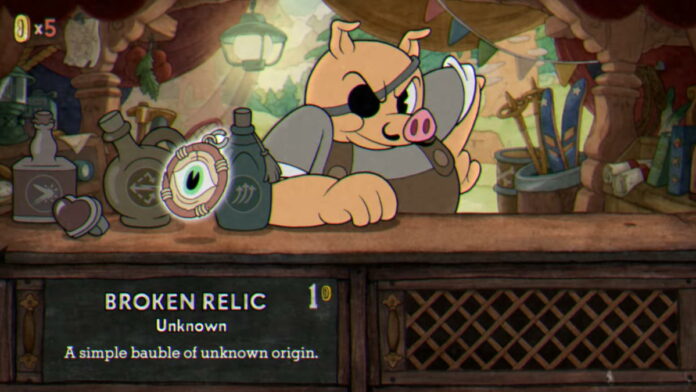 Cuphead’s DLC is finally here, aptly named the Delicious Last Course! With it comes a whole new island full of challenging to bosses to fight, plus a slew of secrets and hidden goodies. We’ll be looking at a secret boss and its matching achievement, so let’s get started with our guide on the Cuphead DLC: how to unlock ‘A Horrible Night to Have a Curse’ achievement!

First off, visit Porkrind’s Emporium on the new island. You’ll notice that he’s selling a strange item called the Broken Relic for one coin, so buy it. If you don’t have any spare coins, there’s one hidden behind Porkrind’s Emporium, nestled between the trees.

You’ll now have the Broken Relic in your charm inventory. Equipping it seems to have no effect, so don’t worry about it for now. You’ll need to solve a mystery, so get your thinking caps on!

Next to Porkrind’s Emporium, you should see three mountain climbers who just finished a competition. Talk to the first place climber, and they’ll give you a brief quip on their victory, but pay close attention to their phrase, as they’ll mention a specific direction.

Now, speak to the second place climber, and they’ll have a similar phrase with another direction. Repeat the process with the third place climber. The climbers’ directions are random between games, so your directions will probably be different from ours. Write down the directions and the order from first to last place, to make the next part easier.

Head southeast and go around the bend across the rock bridge, and you’ll end up in a graveyard. What you need you to do is interact with the gravestones using the directions provided to you by the climbers, in order from first to last place.

If you did the sequence correctly, the middle gravestone should now be glowing blue. Examine it, and you’ll be taken to a secret boss fight. You’ll face off against two entities that look similar to the Devil from the base game, though they have a peculiar mechanic you need to know about.

The two devils appear on the left and right sides of the screen, never moving. You can only attack the devil you’re currently facing—whichever one that has your back turned to them will become an angel, which nullifies all of their attacks.

Their main attack is to pelt you with fireballs. You can jump over them, parry some of them, and you can simply turn around to nullify some of them. The second attack sends a giant vertical beam across the arena, and the only way to dodge it is to face the other devil to nullify the entire beam.

A recommended strategy is to use the Chaser, and simply stand on the cloud that moves back and forth. Plant yourself on the cloud and fire away, as you don’t have to worry about aiming. If the fireballs become too much or the unavoidable beam spawns, simply turn around and start shooting the other devil.

Cuphead DLC: How to Unlock ‘A Horrible Night to Have a Curse’ Achievement