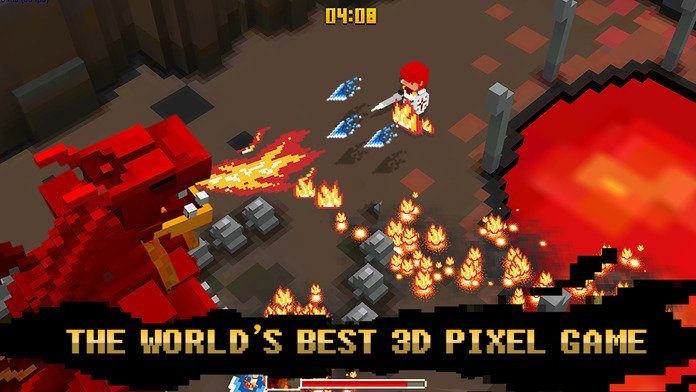 I believe that there aren’t many people who wouldn’t like to jump into the shoes of Lancelot and battle for glory and Camelot. And now we have the chance to do just that, from the safety of our living room (or hidden from our boss’ prying eyes at work) thanks to Cube Knight: Battle of Camelot. This is a freemium game available both on iOS and Android and even though I believe that the differences between the versions are minor, it’s worth mentioning that I have played the iOS version for the purpose of the review.

Just like in most freemium games out there, things are pretty simple and straightforward in Cube Knight: you have to select a character and head into battle, which takes place in small arena-like settings where wave after wave of enemies tries to bring you down. And usually fails, because you’re Lancelot. Or King Arthur. Or Gawain. You get the picture: you can play as any of the knights of the round table, four of which can be unlocked for free, while four more cost premium currency. 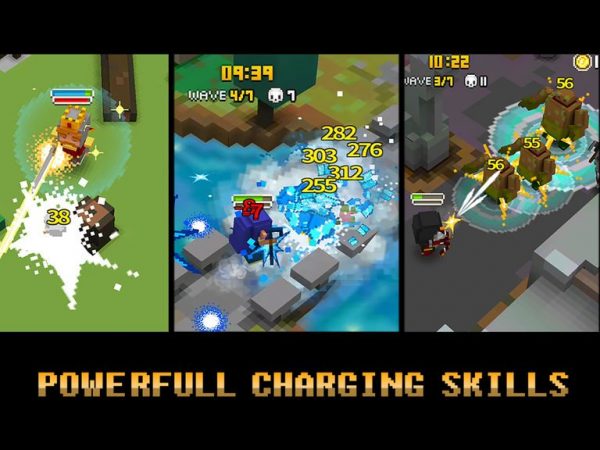 A top down, two-thumb hack and slash game with beautiful voxel graphics, Cube Knight: Battle of Camelot will indeed keep you busy for a long time despite its repetitive scenes that you will play in over and over again. What will keep you playing is exactly what keeps you playing this type of games: the quest to unlock new characters, new weapons, new in-game areas and boss fights, as well as new game features. How can you stop slaying enemies when there’s a big question mark near your shop and you’re wondering what kind of goodies are hidden there?

As far as the gameplay goes, if you have played a two-thumb game before, you already know what to expect. You have a virtual joystick that controls your player’s movements (to the left) and one for shooting to the right. We get an extremely useful Auto shooting button that I personally kept activated at all times and only used the shooting stick to fire away my powered charges.

Each level takes place on a fairly sized map with various obstacles and elements that can help you or mess up your strategy a little bit, while enemies will spawn constantly in waves: there are five waves, usually, all ending with a really nice Boss battle.

The game is a bit repetitive since you will be playing in the same areas over and over again, facing similar enemies, but each new stage brings new challenges and options for players, so you can’t complain too much about it. 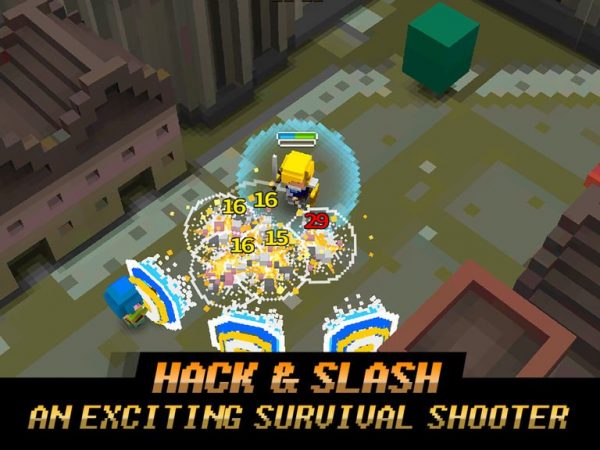 Being a freemium game, Cube Knight: Battle of Camelot has the usual freemium limits: an energy bar that recharges over time, the need to grind on previous levels in order to get the resources needed to upgrade your heroes in order to be able to progress and unlockables as you play. All these freemium features are never annoying and, even though you get a fair share of pop-up ads when playing, there are no reasons to complain and you can fully experience the game and enjoy it without having to spend a single cent.

Cube Knight: Battle of Camelot is addictive and beautiful: it will keep you glued in front of your device’s display and you will only be able to put it down when your energy drains, impatiently waiting for the next energy refill. The graphics are great, especially if you love voxel visuals and there’s enough variety in the game to keep you busy for a long time. 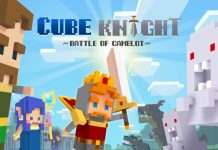