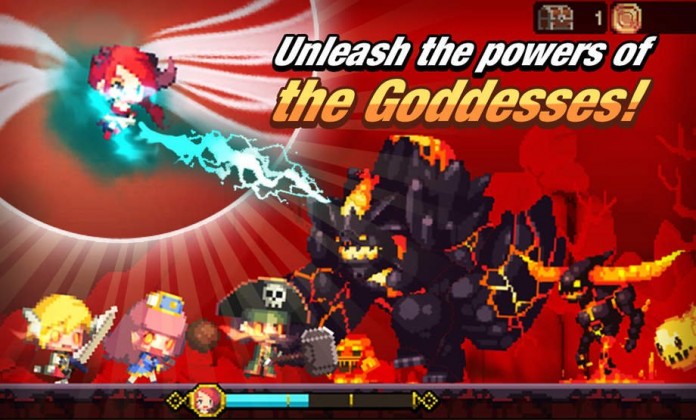 I am all about retro, pixelated RPGs and Crusaders Quest fits the bill perfectly. The latest game launched by Toast is extremely addictive and fun and I am here to help you get the most out of it by sharing with you a complete set of Crusaders Quests cheats, tips and tricks that will create the ultimate strategy guide for beginner and advanced players.

Because fighting for the Goddess and defeating all the enemies in the multitude of stages is extremely difficult, while the game itself is pretty complex, I have decided to come help you understand how the game works and what to do to win all stages without a problem. So read on for our Crusaders Quest tips and cheats!

1. Notice the quests
Nobody says anything about them, but when you are in town, you can get quests – they appear as character icons on the right side of the screen. Tap them, check them out and complete them (usually by simply going through the Adventure mode) and grab some nice rewards.

2. Be active during the fights
Although fighting is pretty much automatic in the game, you still have to control the shields and special attacks and use a bit of strategy in order to win the battles. Be active and smart: try to group the attacks based on the enemies you are facing and use the special attack buttons in such a way that you create chains of two or three similar attack types. Learn how each attack works – some are only useful in melee combat, some are ranged, some affect a specific area and make sure you never waste a special attack. Finally, don’t forget about the Goddess following you – use her special abilities when most needed and always make sure that you have at least one use left for the boss battle – although I usually try to keep them all for the final battle!

3. Claim your mailbox rewards
For various things that you do in your game, you will receive rewards – but many of them won’t be automatically claimed. Instead, they will go to your mailbox and you have 30 days to claim them. Make sure that you check your mailbox regularly and claim those rewards ASAP.

4. Promote your Heroes
As soon as your heroes reach the maximum level of their rank, they can be promoted. Each promotion increases their stats and allows them to level up even further. So try to promote them as soon as they max out their level to have better heroes. You need Honor to do so, and honor is pretty difficult to get – but if you have a lot of active friends, they can gift it to you and you will have to problem keeping your heroes always upgraded.

5. Train your heroes
After each promotion, you can train your heroes using bread (which is made in the Bakery or obtained during questing). This is extremely expensive, but it can increase your skills quite a bit so make sure that when you train your heroes, you use the maximum number of bread (you can only train them once per ranking).

6. Bring your friends into battle
On many occasions, your friends will have leaders that are better than the heroes you own, so it makes a lot of sense to bring them into battles – especially the more difficult ones. It’s true that you only level up two of your heroes following this method, but you can easily cruise through the quests like this and unlock the rewards, then replay them with your heroes over and over again to level them up and be under no pressure.

7. Grind on levels
You actually should replay all stages as often as possible to make sure that you have enough coins and strong heroes to keep on going in the later stages. And the good thing is that you can always be sure that you will beat these stages because you have already done so. It’s a win-win situation.

8. Upgrade your weapons
The game actually calls this converting, and you should do it as soon as you get a weapon (or a better weapon) for your heroes.

9. Always use the best set of heroes
As you complete stages, you will unlock more and more heroes and you should always use the best ones available in battles. Test them all out, see which do better than others (the weapons that you have matter a lot too) and use those in battle. Don’t hesitate to use the practice mode to see how things go and which heroes to bring into battle.

10. Main events and quests
If you really want to increase your chances at winning the game and getting the most out of it, then you should go to the Colosseum and explore the Dungeons. Check out the world events and try to get as far as possible because that’s where the real rewards at. Grind on the completed levels to level up your heroes and get money for the upgrades and complete these special events for some really rare and awesome Heroes!

These would be for now our tips and tricks for Crusaders Quest. If you have other strategies or advice that you think could be useful, let us know by commenting below!