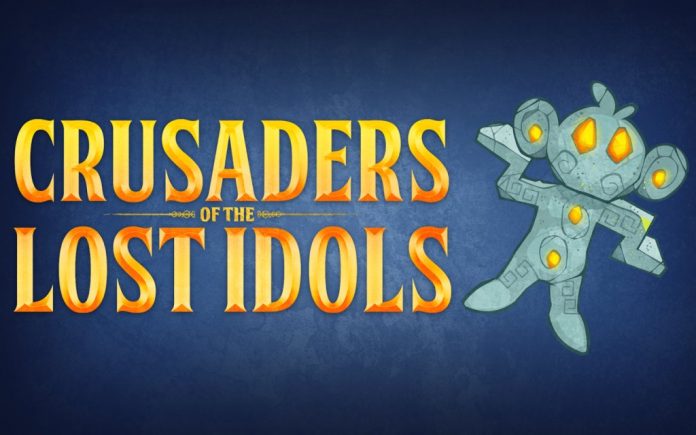 Crusaders of the Lost Idols has just been launched on iPhones and Android powered devices and it’s an absolute blast of a game – one of the best idle clickers that I have played, and I did play a ton of them! The game is complex, challenging and addictive – so much that you should prepare for spending countless hours in front of your display, playing the game. And I am here to help make that experience a lot better by sharing with you some Crusaders of the Lost Idols cheats and tips in a complete strategy guide.

This guide is mostly aimed at beginners (we have one for advanced players incoming), but the experienced ones should read it as well – who knows, there might be a tip or trick here that you weren’t aware of! So without further ado, let’s check out below some Crusaders of the Lost Idols tips, tricks and cheats!

UPDATE: Many people are asking how to get Talents (and idols). You can’t find them while playing the game. You need to reach level 150 with the last Crusader you can unlock (Nate) and reset the world by tapping the Earth Globe icon in the upper right side of the screen. However, in order to actually buy the talents with the idols, you also need to reach a specific area, the first one being area 150.

1. How to choose the best Crusaders for your formation
Even though early on, when starting the game or after a reset, you won’t have much of a choice, pretty soon you will find out that you have more Crusaders than those that you can actually use. Crusaders have different powers and effects and using them in different combinations can mean the difference between a painfully slow progress or a quick run through the levels. This is why it’s vital to know the strengths of each of your Crusaders and especially how good the skills they unlock when they hit the required levels.

For most of the time, you will want Crusaders that boost the damage of all the other Crusaders in the team in order to get the most out of the game. For that matter, even though it’s the first Crusader that you get, Jim the Lumberjack is absolutely amazing as he eventually unlocks the skill that increases the damage of all Crusaders in the same column as his by 50% (So place him in the first column). Pair it up with Sasha who is placed right in front for an extra 30% bonus then keep the likes of the Princess and Prince Sal around and you will get humongous boosts to your overall DPS. So check out all your heroes, see what their strengths are and play around with their placement in your formation. Sometimes simply switching two between then can give you a huge DPS boost!

2. You can remove The Bush Whacker
The nice thing about the game is that it allows you to replace even the main hero – The Bush Whacker, which is the hero that decides how much damage per tap you cause. It’s a great idea to always remove the Bushwhacker from your lineup when you leave the game or when you are not actively playing it (tapping) because, of course, without him in the formation, if you tap, you cause zero damage. The only moment when you should have the Bush Whacker in your formation is when fighting bosses, in order to use the skills and improve your chances at winning.

3. Keep an eye on XP points
Experience points are also an extremely interesting and useful thing: for every 5 hours that a Crusader spends in your formation, he or she gets 100% damage per second bonus. The XP points do reset when you reset the world, so this only matters for the current game. Therefore, learn which heroes you will use the most and try to offer them as much time in the formation as possible in order to maximize their boosts in the long run.

4. Don’t use up your Buffs
It makes absolutely no sense to use any Buff before level 50 (and the cap increases with each reset), because it will only be a wasted buff since you’ll only get a little in return. Try to hold on to your buffs for as long as possible and use them when they really matter, having in mind that those that give you financial bonuses (like the time forward ones) are based on the level you are at, so the higher the level you use them on, the more rewards you will get.

6. Maximize idol revenue each reset
The number of idols you receive when resetting is based on the cumulative number of levels you have bought for all your Crusaders. For every 500 levels you get 1 extra idol – so Jim at level 300 and Khouri at level 200 will mean 1 idol. This means that you should make sure that you level up all your Crusaders as much as possible before leveling up – and you should obviously focus on the starting ones or those you didn’t upgrade too much because you didn’t use in the game: the more levels, the more idols you get!

These would be for now our tips and tricks for Crusaders of the Lost Idols. If you have additional advice to share with us, let is know by leaving a comment below.