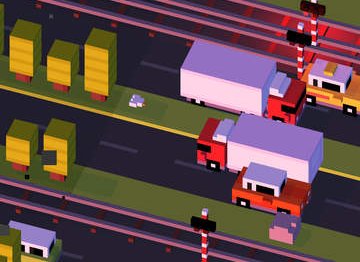 Last week Hipster Whale released a brand new arcade game called Pac-Man 256, a unique endless take on the Pac-Man classic gameplay formula. As the team has also developed the popular Crossy Road, it was only a matter of time before Pac-Man and his rival ghosts would become available as characters in the game.

Earlier today Crossy Road has received a brand new update on iOS which adds Pac-Man as playable character as well as the game’s chicken wearing a Pac-Man T-Shirt. If you use Pac-Man as character, the cars are replaced by Ghosts and it will only be possible to earn points by eating pellets. If you use the chicken, you will have to stay ahead of the 256 glitch just like in Pac-Man 256. The update also includes the four ghosts as playable character but they have to be unlocked in a yet to be revealed way. As an added feature, the new Crossy Road update also fixes a bug that was introduced in the previous update so it’s now possible to get new skins from the gacha machine once again.