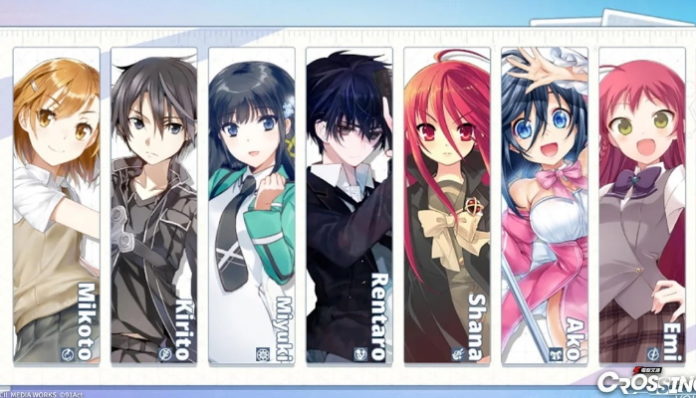 Anime worlds collide in Crossing Void, a new crossover anime RPG from 91Act and Sega. Characters from beloved anime series like Sword Art Online, Toradora, Oreimo, and more meet together in a crossing of fates. Beloved fan-favorites must work together to stop a common foe!

In Crossing Void, attacks can either be physical or arcane damage, and there are two defenses to match both. Characters only have one attack stat, and both types of damage will scale off of their attack stat.

When you are selecting an attack at the bottom of the screen, you will notice that each attack has a “quick name” to show you what the attack does without having to read the full description. The game does not really go over this, so here is a quick legend.

Every skill has a letter abbreviation and then a quick descriptor. For example, “A. Damage” is a skill that deals arcane damage to all foes. “F. Bleed” would damage the front enemy and apply a bleed to them, and so forth.

Since you can have three characters in your party, it is generally a good idea to have one character of each type so that you can keep your attacks balanced.

Buffs and debuffs are very important in this game!

Throughout chapter 1 and 2, the game will teach you the basics and the general buffs and debuffs you will be encounter over the course of the story mode. Make sure to pay attention, as the buffing system in this game is very important.

Do not underestimate how powerful some debuffs can be! The ATK down debuff is particularly nasty, as it cuts all of your outgoing damage in half essentially. Always have a character that can purify on hand to get rid of these nasty effects as soon as possible.

Other particularly nasty debuffs to watch out for are the ones that render you vulnerable to more damage and reduce the healing effectiveness of your party. The damage reflect buff is also dangerous, so make sure to skip turns if you see it on an enemy. Keep an eye on debuffs and deal with them before they become a huge problem for your team!

Balance your attacks out!

The flow of combat is a delicate balance! Start off with your basic attacks, then start using skills to charge up your ultimate climax skill. The more skill points a move costs, the faster your climax skill will charge up, so you need to decide whether to constantly go in every turn or save your skill points for a potentially needed purify or heal.

In celebration of the game’s launch, there is a special event happening right now called Golden Time – Testimony of Love. This also serves as an introductory quest to help new players get accustomed to all of the important mechanics in the game.

There are six steps in the Golden Time quest chain, and you will need to complete specific objectives to progress, like beat a chapter, have a certain number of upgraded equipment, and so forth.

If you can complete all of the quests in the Golden Time chain, you will receive a ticket that will let you acquire an S-rank character of your liking. You can get really powerful with this character, so try to do the quests as soon as you can.

There are also side quests that reward you with helpful items like experience potions and evolution materials. You need as many of these as you can get, so be sure to complete the side quests.

Partake in the Food Diary!

In the event list, you can find an event called Alice’s Food Diary. Alice needs help getting to the end of her diary, and you can help her out by flipping coins to make Alice move forward several spaces on the board.

The board is littered with helpful items including evolution materials and coin. If you manage to complete the diary and make it to the end, you have a chance of recruiting Osmanthus Knight Alice, an S-rank A. Damage character.

In order to make Alice move, you need to get some coins first. Coins can be acquired by completing the missions shown below the food diary. The quests are stuff you will probably do naturally, so be sure to check in with the diary every now and then.

Be careful with auto play!

Auto play is helpful if you want to quickly grind certain levels for specific rewards, but be careful about using it in regular play, as the computer AI can overlook some crucial stuff.

The AI usually controls your team with competently enough, but it can do some questionable things at time, including using purifying skills when there are no debuffs on your team, not dispelling the enemy team’s buffs, and so forth.

If left unchecked, these problems can make the battle go astray, so it is best to pay attention to the game even if you leave auto-play on.

Power up your characters!

If you are having trouble with a fight, it might be time to upgrade your characters in big chunks. The first thing you can do is level them up with the usage of experience items. Leveling up unlocks other things as well, so you should do this first.

Second, you can start outfitting the character with gear. Every character has four equipment slots and you can give them nice stat boosts from gear. You can research to upgrade gear to improve the stat boosts even further.

Third, you can improve their star level. When a character gets another star level, they will receive a big jump in stats and will be able to upgrade their skills further.

Which brings us to skills. Each skill, including a character’s ultimate climax skill, can be upgraded to be more effective. The only thing this requires is coins, so you should max out your character’s skills to the highest they can go.

Finally, you can “awaken” your character if you have the character’s soul item and the generic soul. Various things will occur when a character undergoes awakening, and these include stat boosts, new skills, new skins, and more!

How to get more Maigo for summoning?

As is the case with all gacha-style games, you will be scrambling for lots of maigo – the premium currency – early on to get the characters you want. There are a few ways of getting more maigo.

The first way to complete the daily quests. There are a few of them and they each have their own individual reward, but if you can complete all of them you can earn 50 maigo.

Each story chapter rewards you with 50 maigo as well whenever you complete the entire chapter. If you manage to get all of the stars while you are at it, you will also receive gacha vouchers that let you perform free summons.

There are not many ways to earn maigo itself, but you can earn a lot of gacha vouchers. Get all of the chapter stars, participate in the events like the Rookie Project, Food Diary, and the daily sign-in bonuses to get more vouchers.

Who to choose for your starting group?

You will start out the game with a B-rank Mikoto, who is an arcane attacker. Since she is B-rank, her stat growth potential is decent, meaning she will be a part of your team for a while. Her Electric Shock skill deals good damage to the entire enemy team while applying a bleed debuff, making her useful for an extended amount of time.

If you did not pull a healer from the free summon they give you during the tutorial, we recommend you spend your free S-rank on one. Kirino and AKO are good choices, as they have good healing skills and they have support effects that amplify their abilities.

If you want a good a front attacker, you cannot go wrong with the Sword Art Online characters. Both Asuna and Kirito have very strong skills that attack the front enemy only, making them perfect for your front character. Asuna in particular has a powerful climax skill that has a high critical chance.

And that would be our guide on Crossing Void for now. Use the right skills at the right time, level up and gear out your characters, and you should be able to overcome any obstacle! If you have any other tips or tricks to share, let us know in the comments below! 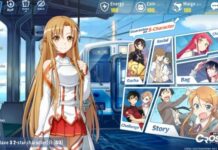