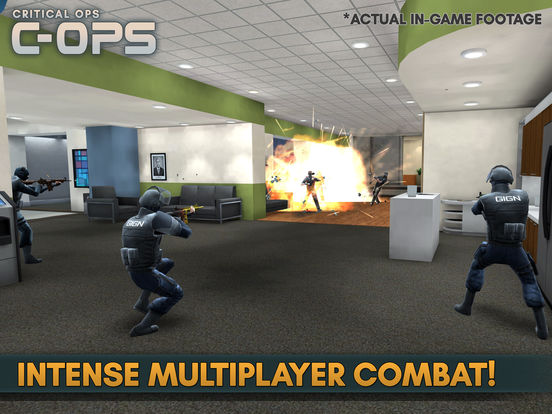 Critical Ops is an intense first-person shooter that will put you right in a modern terrorist encounter. Taking heavy inspiration from the hit shooter Counter-Strike, Critical Ops is a faithful mobile spin on the tactical shooter. Your reflexes and strategies will be put to the ultimate test, so let’s read up on some tips in our Critical Ops cheats, tips and tricks strategy guide!

Critical Ops is an intense game so make sure your alert and ready to go before you head into a match. Don’t sweat it though, as no matter the outcomes of your matches it’s always fast-paced fun. Practice always help, so let’s get started with our Critical Ops tips and tricks guide.

During a game, take a quick peek at the pause menu. On the right hand side you’ll see a list of missions for you. They’re usually requests like kill a certain amount of players using this gun or make a specific number of headshots.

If you manage to complete a mission you’ll be rewarded with a small amount of credits that can be put towards your next case!

2. Shoot before you aim!

The way aiming works in this game is somewhat tricky. When you’re navigating a map, be alert. The very second you see someone, immediately tap the shoot button and drag it to aim as fast and accurate as you can.

Do not aim first and then start shooting – more often than not you will end up dead if you do this. We found that we won most of our fights using this small tip. Of course, if you’re quick enough, you can try aiming before hand and then shooting.

This works best with automatic weapons like SMGs and assault rifles, but keep in mind that as long as you’re holding down the fire button you will continue to shoot. If you’re using a pistol or shotgun, you’ll miss your first shot usually but keep the button held down. The only exception to this rule are sniper rifles.

There are five kinds of guns to pick from and the key to success is finding the right weapon for you!

When it comes down to it, no matter how quick your reflexes are, map awareness is the most important quality to have. Obviously this is going to take some time, but as you play matches be sure to pay attention to how the maps are laid out.

Take note of all the places where people can hide and ambush you, the open wide areas, the closed spaces, and so forth. Knowing exactly where to go to suit the gun you currently have equipped is the best way to tackle your opponents.

That would be for now our Critical Ops tips and tricks. If you have any other tips or tricks to share – and we’re sure you do as this is a super competitive multiplayer shooter – leave a comment below!